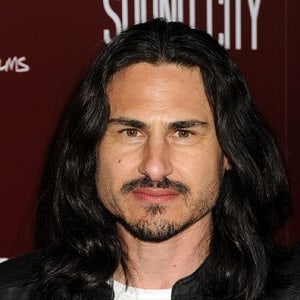 What is the relationship of Brad Wilk?

Brad Wilk was previously married to Selene H. Vigil. The pair married on 10 December 2005. They have two children from this marriage. They separated later in 2013. Currently, Wilk is in a relationship with actress turned singer, Juliette Lewis.

Who is Brad Wilk?

Brad Wilk is an American musician, activist, and actor. People mostly know him as the drummer for the band Rage Against the Machine’, ‘Audioslave’, and ‘Prophets of Rage’. Additionally, he has also performed drums on the English metal band ‘Black Sabbath.

Wilk was born as Bradley J. “Brad” Wilk in Portland, Oregon on September 5, 1968. He developed a keen interest in music and started to play the drums when he was thirteen years old. He is of American nationality. Furthermore, he belongs to the Ashkenazi Jewish ethnic background.

Wilk alongside Zack de la Rocha, Tim Commerford, and Tom Morello formed ‘Rage Against the Machine’. Additionally, in 1992, the band signed a record deal with Epic Records. In the same year, the band released their self-titled debut. The band later went on to release other successful albums like ‘Evil Empire’, ‘Live & Rare’, ‘The Battle of Los Angeles’, ‘Renegades’, and ‘Live at the Grand Olympic Auditorium. After the band disbanded in October 2000, Wilk joined the band ‘Audioslave’ and the band released its debut album on November 19, 2002.

‘Audioslave’ released other two albums, ‘Out of Exile’ and ‘Revelations’. Wilk has since then worked on several other projects. He has become part of bands like ‘Prophets of Rage’, ‘The Last Internationale’, ‘Smashing Pumpkins, and ‘Foo Fighters’ among others. Additionally, Wilk portrayed the lead role in the independent short movie ‘Sleeping Dogs Lie.

Wilk has won 2 Grammy Awards and has garnered 10 Grammy nominations.

Wilk has not revealed his current salary. However, he has an estimated net worth of around $ 20 million as of 2022.

Several of Rage Against the Machine’s political views and activism have been controversial. At present, there are no rumors concerning his life and career.

How tall is Brad Wilk?

Talking about his body measurement, Wilk has a height of 5 feet 11 inches (1.8 m). Additionally, his hair color and eye color are dark brown.

Happy National Selfie Day! Check out Some of the Iconic Celebrities Selfie of all time!!