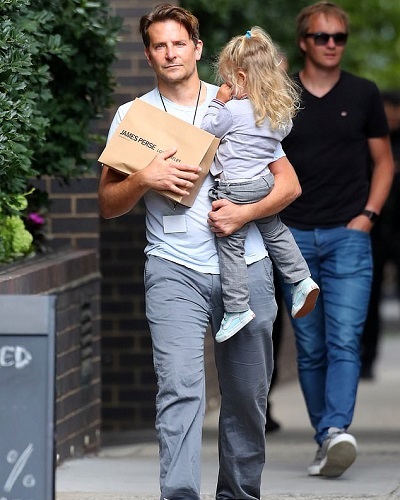 Bradley Cooper and his quarantine activities

The actor, Bradley Cooper, 46 spoke to Interview magazine about what he did during g the free time he had at home during the coronavirus-induced self-isolation. The star disclosed that he did not go out due to his mother’s ill health.

And the doting father also was, training his daughter Lea De Seine Shayk Cooper, 4 swimming in their bathtub. It was a one-man playschool.

‘I’m with my daughter and my mother and my two dogs, and we have not left the house. My mother is going to be 80, and she has a colostomy bag, so I can’t let anybody in the house. And I can’t leave the house, because if she gets it, it’s over,’

‘We live in a little townhouse, thankfully there’s a backyard. I’m running a one-man preschool. We get up, we do swim class in the bathtub.’

Who and Where is Lea’s mother?

Lea is the daughter of Bradley Cooper with his ex-girlfriend, Irina Shayk. Bradley and Irina had dated for four years and Lea was, born in 2017. But the relationship could not last and they broke up last year. But Irina has no regrets.

This summer, she gave an interview to British Vogue magazine where she said:

‘I think in all good relationships you bring your best and your worst – it’s just the nature of a human being. Two great people don’t have to make a good couple. I think we’ve been very lucky to experience what we had with each other. Life without B is new ground,’

But she did admit that she had difficulty adapting to her new role as a single mother. She said:

‘It’s hard to find a balance between being a single mom and being a working woman and provider. Trust me, there are days I wake up and I’m like, “Oh my god, I don’t know what to do, I’m falling apart.”‘

Shortly before the couple announced their split, there were romance rumors of Bradley and Lady Gaga doing rounds. The two had starred together in A Star Is Born. The two had given an intimate performance of their song Shallow during the Academy Awards function. But Lady Gaga has denied the rumors.

In the film, Bradley portrayed the character of a country singer. And he also had managed the direction of the movie.

‘First and foremost, people ask me all the time, “How was it working with Bradley Cooper?” I say, “He’s probably one of the great- est directors of all time. That dude is one of the best teachers I have ever had the honor and privilege to learn under.” If I could sit on the set with you and just learn, I don’t even need to be in the movie. Just give me a seat, and I’ll sit back and watch you work.’

Toni Braxton, American singer regrets not having more sex when she was younger!
Tags : A Star Is Born Actor Actress Director Singer