Actor Bradley Whitford is married to his co-star. He is a father of three. 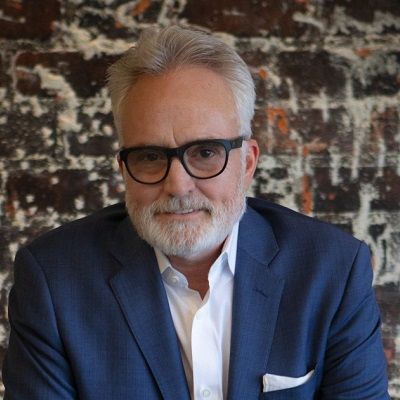 Anybody who can dial a telephone can master tennis scoring in about 15 minutes.

Bradley Whitford is a married man. He began dating his co-star Amy Landecker in 2015. They announced their engagement in March 2018. This couple got married on July 17, 2019.

Previously, Whitford was married to actress Jane Kaczmarek in August 1992. They had three children together, Frances Genevieve born in October 1997, George Edward born in December 1999, and Mary Louisa born in November 2002.

In June 2009, this couple announced that they were divorcing after 16 years of marriage, and their divorce was finalized in October 2010.

Who is Bradley Whitford?

Bradley Whitford is an American political activist and an actor. He is best known for his portrayal of White House Deputy Chief of Staff Josh Lyman in the NBC television political drama The West Wing.

This actor was born on October 10, 1959, in Madison, Wisconsin, the US. His mother’s name is Genevieve Louie and his father’s name is George Van Norman Whitford. He used to live in Wayne, Pennsylvania between the age of three to fourteen.Later, he grew up in a Quaker Household

He belongs of English descent.

Bradley studied at Madison East High School and got graduation from Wesleyan University with a Bachelor in Arts in 1981.

Bradley Whitford first appeared on television in 1985 in an episode of  The Equalizer followed by a two-year recurring role on the ABC Soap Opera All My Children.

He made his debut in the 1986 film ‘Doorman‘. He made his Broadway theatre debut in 1990 in the play written by Aron Sorkin, playing Lt. Jack Ross.

This was the beginning of a working relationship between Whitford and Sorkin. Whitford also made a guest appearance on ER in the Emmy award-winning March 1995 episode ‘Love’s Labor Lost.

He joined the cast of Sorkin’s ‘The West Wing‘ as ‘Josh Lyman’ which was premiered in 1999. For his role, he won an Emmy Award in 2001 for Best Supporting Actor in a Drama Series. Bradley also wrote two episodes of the series ‘Faith-Based Initiative’ in the sixth season and ‘Internal Displacement’ in the seventh season.

After The West Wing ended in May 2006, Whitford appeared in Sorkin’s later series ‘Studio 60 on the Sunset Strip’, where played the role of Danny Tripp. He also appeared in the British drama Burn Up on the BBC in July 2008.

In 2008, he starred on Broadway in Boeing Boeing. Later, he left the show the same year and was succeeded in the role by Greg Germann. He also co-starred in the horror film The Cabin in the Woods, filmed in 2009 but not released until April 2012.

In 2010, Whitford starred as Dan Stark in the TV comedy opposite Colin Hanks. In 2011, he guest-starred in In Plain Sight on USA Network as a man combatting paranoia. The same year, he appeared in the season three finale of The Mentalist. Whitford also appeared on Law & Order: Los Angeles as a lawyer.

In 2013, he played Pete Harrison in the ABC comedy Trophy Wife, which was canceled after one season. Recently, this actor appeared in the Amazon series Transparent in the first season in a recurring role as a cross-dressing businessman.

In 2017, Bradley played Dean Armitage, a father, and neurosurgeon, in the racially-themed horror film Get Out.

In 2018, he joined the cast as Commander Joseph Lawrence of The Handmaid’s Tale on Hulu. Whitford made his guest appearance in the final two episodes of the second season and reprised his role in the third season.

Whitford is a political liberal and has appeared many times on Real Time with Bill Maher. During the run-up to the November 2004 general election, Whitford was playing White House Deputy Chief of Staff, Josh Lyman, on the NBC TV drama series the West Wing. That series made a Satirical video that purported to support then-President George W. Bush for re-election.

Recently, he serves on the Board of Advisors ofLet America Vote, an organization founded by former Missouri Secretary of State Jason Kander that aims to end voter suppression.

This actor earns $1.8 million per year. Meanwhile, according to some sources, he has an estimated net worth of $11 million.

There are no rumors and scandals of this actor regarding his personal life. Meanwhile, he has managed to keep himself out of any rumor and controversy. He is doing very well in his field.