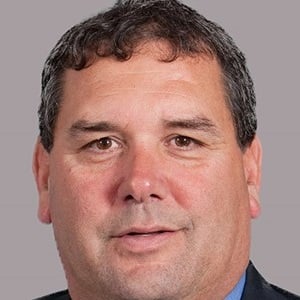 Brady Hoke is a married man. He is married to Laura Homberger Hoke. The pair married on 12 July, 1980. They have a daughter named Kelly together. Kelly was born in 1986 and she graduated from Ball State University. Their marriage is going strong as there is no news regarding any extramarital affairs at present.

Who is Brady Hoke?

Brady Hoke is an American football coach. Previously, he was the head football coach of the Michigan Wolverines. Additionally, he has also worked at Grand Valley State, Western Michigan, Toledo, and Oregon State.

Hoke was born as Brady Patrick Hoke in Dayton, Ohio on November 3, 1958. He was born to parents Pat and John Hoke. He was exposed to the world of football at an early age as his father played for future Ohio State coach Woody Hayes at Miami University. Brady is of American nationality. Furthermore, there are no details available about his ethnic background at present.

Talking about his education, Hoke attended Fairmont East High School and graduated in 1977. In addition, he also attended Ball State University. He played football as a linebacker for the team.

Hoke has not revealed his current salary. Furthermore, there are no details available about his estimated net worth at present.

Hoke became part of a controversy after his treatment of Shane Morris in September 2014 was criticized by fans around the world. Furthermore, Brady has been part of several other controversies over the years. At present, there are no rumors concerning Hoke and his career.

Talking about his body measurement, there are no details available about Hoke’s height and weight. His hair color and eye color is dark brown.