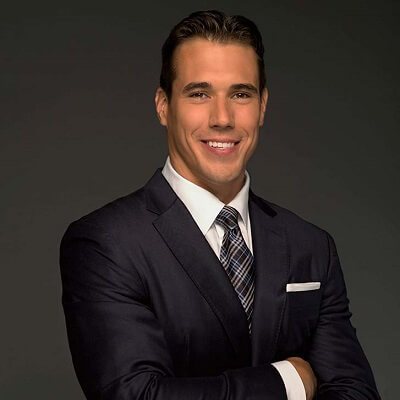 Brady Quinn is a married man. He is happily married to American Olympic gymnast Alicia Sacramone. The couple started dating back in 2009. Around three years later, the couple announced their engagement in August of 2013. Seven months after the announcement of their engagement, the couple exchanged wedding vows on March 8, 2014.

Together, the couple has three daughters. Alicia gave birth to their first daughter, Sloan Scott Quinn on August 5, 2016. Around two years later, they were blessed with their second daughter, Teagan Marie Quinn on July 7, 2018. On February 17, 2020, the couple announced the birth of their third daughter, Cassidy Nicole Quinn.

Who is Brady Quinn?

Brady Quinn is an American former football quarterback who played college football for Notre Dame and also played in the NFL for Cleveland Browns, Denver Broncos, Kansas City Chiefs, St. Louis Rams, and the New York Jets. Currently, he is a game analyst for Fox Sports and college football and NFL analyst for CBS Sports HQ.

Brady Quinn was born in Columbus, Ohio, on October 27, 1984, to parents, Tyrone J. Quinn(father) and Robin D. Quinn(mother). As of 2020, his age is 107 kg. He was born as the second of three children of their parents. He has two sisters, Laura, and Kelly Katherine. Laura is the wife of former NFL linebacker A. J. Hawk. His younger sister, Kelly is the wife of NHL defenseman, Jack Johnson. He spent his childhood days in Columbus with his family.

His ethnicity is Irish.

Talking about his education, he attended Dublin Coffman High School in Dublin, Ohio. Following that, he obtained a full scholarship for four years in Notre Dame.

Quinn started playing football from an early age. He played High School football for Dublin Coffman High School, Dublin, Ohio. He made a huge impact and was an important part of his team as he was ranked number 20 on ESPN’s list of the top 100 prospects of the nation. Similarly, he was also ranked sixth on the Detroit Free Press ‘Best of the Midwest’ team.

After high school, he received a full scholarship from Notre Dame to play college football. He played there for all four seasons. In his four-year-long career as a college footballer, he achieved great popularity as he was proved to be one of the best players around. He was also awarded a Maxwell Award and Johnny Unitas Golden Arm Award.

In 2007, he went professional and was drafted by the Cleveland Browns. His NFL career did not go as planned as he failed to make a significant impact as he did for Notre Dame. He later also played for Denver Broncos, Seattle Seahawks, New York Jets, Kansas City Chiefs,  Miami Dolphins, and St. Louis Rams.

Brady Quinn’s Career as an Analyst

Similarly, he co-hosts the show, ‘Blitz’ on Sirius XM NFL Radio and has his own radio show for FOX Sports Radio called ‘Knox and Quinn’.

Brady Quinn has an estimated net worth of around $10 million. In his final season in the NFL, he had an annual salary of $855,000. Following that, he has been working as an analyst for Fox. Although his exact salary has not been revealed yet, the average salary for a Fox Sports Analyst is around $83k per year.

There are no rumors about him. Similarly, he has not been involved in any major controversies. However, as a college football analyst, he made a controversial prediction as he said he thinks Alabama, Georgia, and LSU all would make it into the final four of the season. He did explain his controversial pick and explained why he thought so.

Brady Quinn stands at a height of around 6 feet 3 inches. Moreover, he weighs around 107 kg. He has brown hair and brown eyes.

You may also like to read the Bio, Career, Net Worth, Body Measurements, Social Media, and more of Peyton Hillis, Jordan Rodgers, Troy Polamalu, and more.