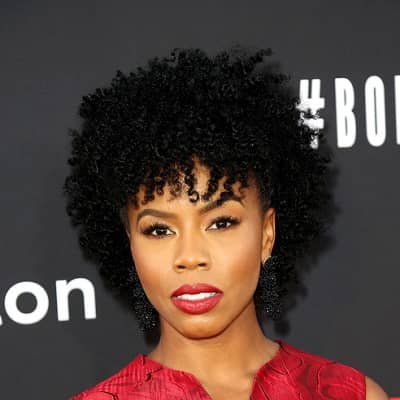 There is no information regarding her present love life. She is tight-lipped when it comes to talking about his personal details. She is possibly single for now. Likewise, she keeps on posting photos with her friends on her social media account. Currently, she is serious about her career and working hard on it.

Moreover, there isn’t any information regarding her past affairs and dating history. Brandee has not yet opened about her romantic relationship. Therefore, The information about her love life is still a mystery.

Who is Brandee Evans?

Brandee Evans is an American actress, Choreographer, and Model. She is popular for her role as Mercedes in Drama Tv Series, P-Valley.

Moreover, She was nominated for the NAACP Image Award for Outstanding Actress in a Drama Series.

Moreover, her nationality is American and her ethnicity is Afro-American. Similarly, her birth sign is Gemini. Talking about her education, Brandee finished her schooling at Overton High School and later graduated from the University of Memphis.

All about Brandee Evan’s Acting Career

Brandee is a hard-working and dedicated personality. Before her acting career, she was a former high school English teacher. Brandee made her film debut in the year 2012 on a movie ‘Note to self’ with the role of Sorority Girl. After that, she made her television appearance in films including Beyond the Lights (2014),  The New Edition Story (2017), Lethal Weapon (2018), Games People Play (2019), and The Bobby Brown Story (2018).

In 2020, Evans portrayed the role of Mercedes in the Drama Tv Series P-Valley. Her performance in the series was incredible. People loved and praised her presence in the series. For her performance, she was nominated for the NAACP Image Award for Outstanding Actress in a Drama Series.

She made her latest appearance in the 2021 movies, B-Boy Blues and A Rich Christmas with the role of Michi and Carolyn respectively.

Apart from her movie roles, Brandee is also a professional dancer. She has choreographed for many popular celebrities. Moreover, she has assisted great personalities on their world tour.

She has collaborated with personalities like Lil Wayne, Katy Perry, Diddy, and Kelly Rowland. In addition, Brandee has performed her dancing skills on big stages that include the Teen Choice Awards, the Grammy’s, the BET Awards, America’s Got Talent, So You Think You Can Dance, Today Show, and SNL.

Brandee has earned herself a net worth of about $1.3M. Likewise, the major source of her income is her movie roles and choreography. Also, she earns a good amount of money through brand endorsements, Sponsors and advertisements. Similarly, she has an estimated income of $690.000.

Evans is a beautiful woman with great charm and cuteness. Likewise, she has a suitable height of 5 feet 5 inches and an average weight of 61 kg. Her hair color is black and her eyes are dark brown. Moreover, she is best recognized for her sexy body build and irresistible curvy structure.

Click on the link below to get info about Laura New, Angela Trimbur, and Cheryl Burke !!