The reality star, Brandi Passante has made her appearance on the shows including Brandi & Jarrod: Married to the Job and Storage Wars. Brandi is a divorcee with two children.

Previously, Brandi was married to Jarrod Schulz and regrettably, as of 24th September 2019, have announced their split. Though Brandi and Jarrod are business partners, they have managed their personal and professional life quite well.

Together they have two children, Camren Schulz and Payton Schulz. 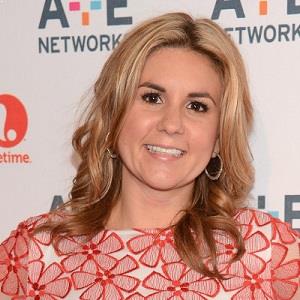 You cannot bring your work life into your home life, so whatever conflict we ever had during the day, we let it go when we come home.

We figured out a balance because we're together 24/7.

Who is Brandi Passante?

Brandi Passante is an American reality TV personality. She is best known for appearing on her own show called ‘Brandi & Jarrod: Married to the Job’ alongside her husband Jarrod Schulz.

Brandi is also famous for appearing with her husband as the main cast on the A&E reality show Storage Wars since 2010.

She is currently starring in the 10th season of the TV series, Storage Wars.

Brandi Passante was born Brandi Leigh Passante on 16 May 1980, in Harris County, Texas, USA. She is of French-American ancestry.

Her father is no more. She misses her dad and Brandi is definitely a daddy’s girl.

There is no information about Brandi’s parents and siblings.

Brandi Passante began her career doing a carpet-cleaning job. After that, she opened her own store, Now & Then in California.

She began her TV career as a cast member in the reality series Storage Wars in 2010.

Since then, she appeared as the main cast on the show alongside her husband Jarrod Schulz. Moreover, she has her own show.

In 2014, the couple began their own reality show ‘Brandi & Jarrod: Married to the Job”. Since then, they regularly appear on the show.

Through the show, Brandi & Jarrod: Married to the Job, she earns $15,000 per episode with her husband.

The salary of the stars of the Storage wars is estimated to be from $30k-$15k an episode.

She said that she had no idea about the pictures. She later claimed that she was not the one on the videos and photos saying that the photos were fake.

Hence, she demanded $2.5 million in actual and exemplary damages from him. Moore was found guilty in the case in court.

Rumors were that Brandi and her husband were aware of the show, Storage Wars being rigged.