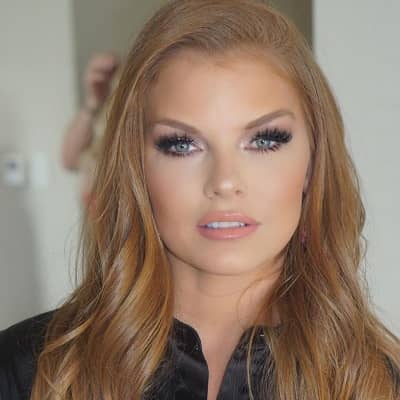 Brandi Redmond is happily married to her high school sweetheart, Bryan Redmond who is a Real Estate Developer for marinas.

Her husband is the founding Principal and CIO of Suntex Marinas as per other online sources. The couple exchanges their vows on 27, September 2003. They celebrate their 17 anniversary on 27, September 27, 2020, and Brandi also posted on Instagram.

The couple blessed with 3 children and they are expecting their fourth child in 2021. They welcomed their first child a daughter, Brooklyn Redmond in 2009.

After three years, they welcome their second daughter, Brinkley Redmond in 2012. Later, they adopted a son, Bruin Charles Redmond on December 31, 2017.

Who is Brandi Redmond?

Brandi Redmond is an American former cheerleader and reality television star. She is best known as an All-Star and five-time cheerleader for the Dallas Cowboys and as a Tv personality who appeared in The Real Housewives of Dallas.

Brandi was born on July 10, 1978, in Tennessee, Nashville, United States, and raised in Austin. As of 2020, she is 43 years old. She holds an American nationality and her ethnicity is unknown. Her Zodiac sign is Cancer.

Her mother’s name is Jana Nace but information about her father is not available. She has two brothers named Don Nace and Michael Nace. Her brothers are now in the US army.

She graduated from Texas Women University with a Bachelor’s Degree of Science in Sociology.

In 2017, Brandi started an online clothing boutique, Brandi, with her friend Mandy and sister in law Megan.

Brandi was cast in Bravo Tv’s reality TV show, The Real Housewives of Dallas (RHOD) in 2016. Before Brandi started her career on TV, she was an All-star, Pro-Bowl, and five-time cheerleader for the Dallas Cowboys.

Besides, she is also a former spokesmodel and mentor for Varsity Spirit Fashions and University cheerleaders association. She has served under a government contractor working closely with Aerospace Defense, NASA, and Telemetry.

Furthermore, she is very passionate about helping others. She supports charities both locally and nationally including Operation smile, The Community Partner of Dallas and Folds of Honor, JDRF, and more.

In 2017, Brandi shared a video of making fun of Asians, squinting her eyes, and changing the sound of her voice which creates a huge buzz in the media and she faces consequences.

Also, Stephanie Hollman dumped her as a friend because of Videos.

The reality TV Star has earned a decent sum of money throughout her profession. As of 2020, her net worth is around $4 million.

She is 5 feet 7 inches tall approximately and her weight is unknown. Likewise, She has blonde hair color and her eyes color is blue. Brandi’s bra size is 36B.

Unfortunately, no information available regarding her other body measurement.

The reality Tv star is active on Instagram with over 479k followers. She joined Twitter in April 2009 where she has over 94.9k followers.