Brandi Rhodes is an American professional wrestler, model, businesswoman, and television personality. She is married to Cody Rhodes. 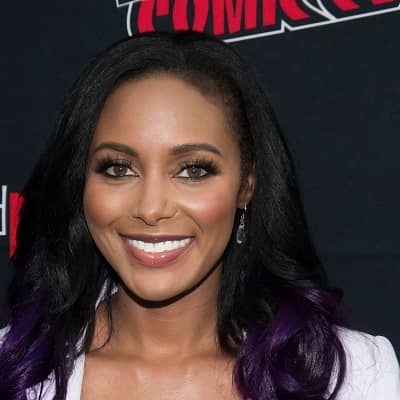 My moment where I knew this was the person for me was when Cody asked me on a date to Halloween Horror Night at Universal Studios.

Brandi Rhodes is a married woman. She exchanged her vows with a professional wrestler Cody Rhodes on 2013 September 12.

This couple started dating in 2011 where they used to work together in the same place.

Who is Brandi Rhodes?

Brandi Rhodes is an American professional wrestler, model, businesswoman, and television personality. She is best known as the chief brand officer of All Elite Wrestling.

This wrestler was born on 23 June 1983, in Michigan, the US with a birth name Brandi Alexis Reed. She hasn’t shared details about her father and mother. She has a brother named Jason.

She belongs to the Afro-American descent.

Brandi Rhodes loves skating and she began figure skating at the age of four. Earlier, after completing graduation, she worked as a local news reporter, and a model.

In 2011, she was invited into a WWE tryout and signed a contract with WWE in March. She was assigned to Florida championship wrestling.

The same year, Rhodes made her debut accompanying Lucky Cannon at an FCW house show. She also worked as a ring announcer and announced duties on NXT under the ring name Eden Stiles.

Her WWE contract ended on 2011 December. Afterward, she began working as a regular ring announcer and interviewer for Main Event and SmackDown in 2014 October.

On August 26, 2016, Brandi was seen at ‘Wrestling Under the Stars’ in Cody Rhodes’ corner in his match against Mike Bennett. The same year in October, she made her single wrestling debut at Pro Wrestling Magicagainst Jordynne Grace.

The next year, she played against Tessa Blanchard at Northeast Wrestling and defeated her on 15 July. In 2018, she wrestled for Fight Forever Wrestling and won against Viper and Bea Priestley.

Rhodes made her surprise appearance at Rise Wrestling in 2019 alongside Britt Baker and Nyla Rose. Later, she signed as a chief brand officer of All Elite Wrestling, a new wrestling promotion co-founded by Cody Rhodes.

There is no rumor and scandal about this sportswoman. Meanwhile, she has managed to keep herself out of any rumor and controversy. She is doing great in her career.

Similarly, she has her own YouTube channel with over 15 K subscribers.