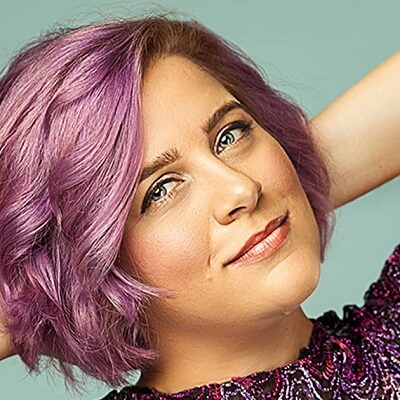 Brandie Posey is currently single. However, on a Twitter post in 2016, she did mention having a boyfriend and calling him Blackberry Dahlia when he had smoothies in the corners of his mouth. She likes making jokes so this might also be one of her jokes. Apart from that, she has not confirmed or spoken anything about having a boyfriend.

She is very private about her personal life and also has not mentioned any of her past affairs.

Who is Brandie Posey?

Brandie Posey is an American stand-up comedian, writer, and producer who is famous as the performer at the New York Comedy Festival. She has also performed in many other festivals such as RIOT Comedy Festival, San Francisco Sketchfest, Bridgetown Comedy Festival, and many more.

Brandie Posey was born on March 13, 1984, in Baltimore, Maryland, USA. Her current age is 36. She was born and raised there by her parents. However, there is no information regarding her parents or siblings yet. She also hasn’t revealed her education status yet.

Her ethnicity is Germanic.

Brandie Posey’s career as a stand-up comedian was very successful as she has been featured as a performer at the New York Comedy Festival, RIOT Comedy Festival, San Francisco Sketchfest, FEST in Gainesville, Bridgetown Comedy Festival, The All Jane Festival, among many others. Furthermore, she has opened for the legendary punk band ‘Against Me!’. She has also appeared on famous shows like  ‘MTV, E!’ and ‘Comedy Central’.

In 2015, she made her film debut in the dark comedy movie called ‘The Worst Year of My Life’ which was directed by Jonathan Smith. The following year, she released her debut stand up record called ‘Opinion Cave’ which peaked at #1 on iTunes and #12 on Billboard. She was also chosen to represent the LA comedy scene on the compilation album called ‘Holy F*ck Album Comedy’.

Aside from her stand up comedy, she is also the co-creator and the host of the popular comedy animation show with franchises called ‘Picture This’. This show has been held in LA, Portland, New York & San Francisco. She now calls LA’s comedy scene as her home.

Brandie has an estimated net worth of around $100k-$1 million. She has not revealed her salary. However, a comedian in the US makes an average of $113-$266 per hour of work.

Currently, Brandie Posey is not involved in any kind of rumors or controversies.

She has a height of 5 feet 6 inches but her weight is unknown. Moreover, she has a pair of beautiful blue eyes. Her hair color is brown but she often dyes her hair into different colors like purple, red, and blue.

You may also like to know more about the Bio, Age, Career, Net Worth, Relationship, of Paul Rodriguez, Rose Ellen Dix, Nate Bargatze, and Andrew Santino