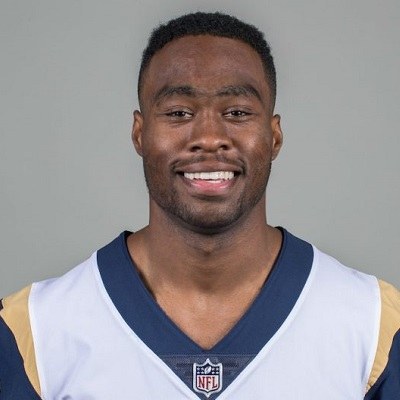 Brandin Cooks is leading a happily married life with Briannon Lepman. The wedding took place on the 7th of July 2018 in the backyard of Orgon’s house.

The lovebird started dating during their University days. At the time, Lepman happened to a member of the cheerleading team.

Who is Brandin Cooks?

American Brandin Cooks is an NFL football player. He is renowned for his offensive playing style as a wide receiver.

Lastly, he was playing for the Los Angeles Rams. However, now, he is with the Houston Texans.

Also, he holds the record of the longest touchdown reception with 98 yards.

Cooks was born Brandin Tawan Cooks on the 25th of September 1993 in Stockton, California.

His father, Worth  Cooks passed away in 1999 out of heart attack. Later, he was raised by his mother, Andrea Cooks.

He has four siblings that include four brothers, Fred Cooks, Andre Cooks, Maurice Washington, and Worth Cooks. They are of British ethnicity.

He started playing football in his High School days. During the sophomore year, he had 29 receptions for 600 yards with seven touchdowns.

After graduation from High School, he joined Oregon state in 2011. Under the coach, Mike Riley, he played for the state till 2013.

Professionally, Brandin Cooks started his journey as a football player. In the 2014 NFL Draft, New Orleans Saints selected him as a rookie.

On the 18th of May 2014, he signed four years contract with the Saints worth $8.3 million. In the rookie year, he ended the season with 53 receptions for 550 receiving yards along with 3 touchdowns.

The following year, he became the no.1 wide receiver for Saints with 84 catches for 1,138 yards along with nine touchdowns. In the 2015 season, he played against the teams including Philadelphia Eagles, New York Giants, and Tennessee Titans.

Later, he ended the 2016 season for Saints with the 78 receptions with 1,173 yards along with eight touchdowns which is his career-high at the time.

On the 10th of March 2017, Saints traded him toe New England Patriots for first- and the third-round pick.

After the season, Patriots traded him to Los Angeles Rams for a first- and sixth-round pick. With the Rams, he signed five years contract that worth $81 million. However, he played for Rams for only two seasons that includes the 2018 and 2019.

He ended the 2019 season with the lowest record in his career time that includes 42 receptions for 583 yards along with two touchdowns.

Last, On the 10th of April 2020, Rams traded him to Houston Texans for the second-round draft pick in the 2020 NFL Draft.

Till the date, he has not been through any sort of controversy that created a buzz in the media.

However, the recent news his trade with Houston Texans has created a buzz in the media. The trade would be his third trade in his six years of career as the NFL player which is quite unusual for the player. With the trade, since 1980, he became the second most trade player.

Brandin Cooks has black eyes with black hair. His height is around 5 feet and 10 inches and weighs around 84 kg.