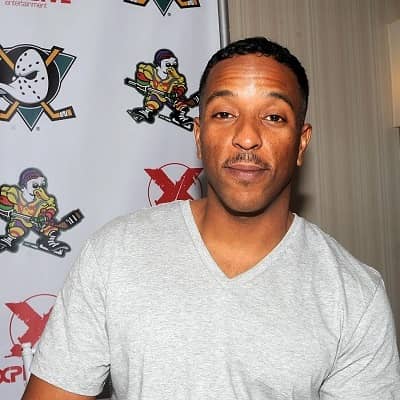 I was everybody's little boyfriend when I was younger. It's all good. It's just love, you know. I'll take the love. Give it to me.

I spent most of my young life in the business and missed out on school events. I needed to be a young person and do what I wanted to do.

As he prefers to keep his personal life private the information about his dating life is under research.

Who is Brandon Adams?

Brandon Adams is an American actor. He is mostly known for his roles in The Mighty Ducks and The Sandlot.

He played the double role of Dion and Tino on the television series A Different World from 1989 to 1991.

He was raised in South Central, LA, and Inglewood. Moreover, no information regarding his education has been disclosed yet.

Brandon is an American actor who is best known for playing Kenny DeNunez in The Sandlot and Jesse Hall in the first two Mighty Ducks film. Also, he portrayed Jimmy Bean in the 1989 movie Polly.

Adams has made an appearance in Moonwalker, Polly, The People Under the Stars, The Mighty Ducks, The Sandlot, Ghost in the Machine, D2:The Mighty Ducks, and more. He has been featured in the TV show Quantum Leap, Empty Nest, Martin, South Beach, Boy Meets World, The Burning Zone, and others.

Furthermore, he has provided Rai’s voice in Kingdom Hearts II.

Brandon has earned Young Artist Award for Outstanding Youth Ensemble in a Motion Picture and Best Young Actor/Actress in a Film Made for Video.

Adams as an actor has accumulated a wealthy sum of money from his career.

He has an estimated net worth of around $300 thousand, whereas his salary and earnings are still under review.

Owing to his long professional career, Brandon has never been a part of any controversial news as of now.

He has always avoided scandals or rumors which may damage his career.

Brandon stands tall at a height of 5 feet and 11 inches and weighs approx 75 kgs.

He has a pair of black eyes and short black colored hair.

Billie Eilish Confirmed her New Relationship with Jesse Rutherford by Sharing a Kiss!