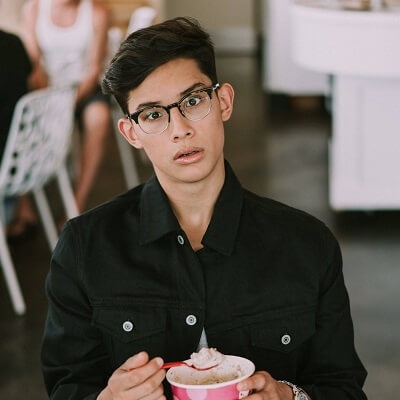 Brandon Arreaga currently seems to be single. He has been in two public relationships in the past.

He dated Charlotte Dean in 2017. The couple seemed very close to each other and posted pictures frequently on social media sites. However, in August 2018, they announced that they had separated.

In 2019, he dated the pop singer, Maggie Lindemann.

Who is Brandon Arreaga?

Brandon Arreaga is an American singer and dancer who is one of the members of the boy band, ‘PRETTYMUCH’. Moreover, he is also associated with the group, ‘TruCrew’.

Brandon Arreaga was born as Brandon Michael Lee Arreaga on December 14, 1999, in Dallas, Texas, United States of America. As of 2020, his age is 20. He was born to parents Chris Arreaga (father) and Gina Arreaga (mother) as one of their two children and has one older sister named Halie Arreaga.

He had a passion for music from an early age and learned to play instruments like piano and the guitar. Moreover, he also built his own studio and started recording at the ripe age of 12. Arreaga spent his childhood days in Dallas and his ethnicity is Caucasian.

Talking about his education, until the sixth grade, he was homeschooled. After that, he enrolled in a public school.

At an early age, he took part in the TV singing competition, ‘Majors & Minors’ which premiered on ‘The Hub’ in September 2011 which was his breakthrough. His popularity massively increased after this and it landed his opportunities in several national commercials. Furthermore, he got the opportunity to work with other musical artists, too which effectively started his career as a musician.

His talents caught the eyes of Simon Cowell and in 2016, he formed a five-man pop boy band named ‘PrettyMuch’ which included him alongside Austin Porter, Edwin Honoret, Nicholas Mara, and Caleb Kuwonu in 2016. The band started by posting cover videos and in July 2017, the band released its debut single titled ‘Would You Mind’ which became a hit. On April 19, 2018, the band released their first project, an extended play titled ‘PRETTYMUCH’. They went on to release two more EPS, ‘Phases-EP’, and ‘INTL:EP’. Moreover, they have also released eighteen singles, and fifteen music videos including ‘Teacher’, ‘On My Way’, ‘Blind’, ‘Open Arms’, ‘Love’, and more.

In addition to PRETTYMUCH, he is also associated with another entertainment group called ‘TruCrew.’ Moreover, he has also made appearances in various TV shows including ‘Entertainment Tonight Canada’ and ‘Good Morning America.’ In 2017, he had a small role in the television movie, ‘A Christmas Story Live.’

Furthermore, he is a member of a company called ‘AMTC’ which is the abbreviation for ‘Actors, Models, and Talent for Christ.’

Arreaga stands at a height of around 5 feet 7 inches and weighs around 65 kg. He has light brown hair and similarly, a pair of brown eyes.

Brandon Arreaga has an estimated net worth of around $300k as of 2020. There is no information about his salary but on average, American dancers earn around $67k per year.

Brandon has not been involved in any controversies. He has been able to keep himself away from any type of controversy and scandal. So far, he has not done anything controversial in his career. He has kept his profile clean and has simply focused on his career and personal life.

You may also like to read the Bio, Career, Relationships, Net Worth,  and more about Emma Stone, Tiffany Coyne, Calum Best, and more.