Brandon Charnas is a well-recognized Real Estate advisor and celebrity husband. He is married to Arielle Charnas and father of two kids. 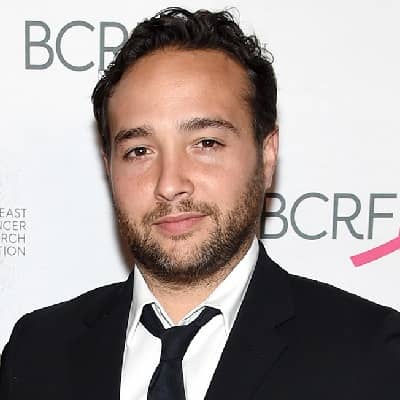 Talking about his relationship details, Brandon Charnas is a married man. He is happily living a married life with Arielle Charnas who is a fashion blogger and Instagram influencer. The couple tied the knot on 18 October 2014.

The couple wedded in a beautiful outdoor ceremony under a floral chuppah followed by a wonderful reception on Fisher Island Club’s patio.

Who is Brandon Charnas?

Brandon Charnas is a well-recognized Real Estate advisor and celebrity husband. Charnas is the co-founder at Current Real Estate Advisor which is a cutting-edge commercial real estate firm focused on identifying the best opportunities for clients.

Moreover, he is also famous as the husband of well-known fashion blogger and Instagram star, Arielle Charnas.

Brandon Charnas was born on 18 July 1985. At present, his age is 36 years old. Likewise, his birthplace is the USA.

Brandon is the son of his father, Mitchell Charnas whereas his mother is Nancy Charnas. Moreover, he has a brother named Cole Charnas.

Talking about his nationality, Charnas holds an American identity whereas his ethnicity is Caucasian.

Regarding education, the businessman completed his graduation from the University of Pennsylvania in 2007 with a Bachelor of Arts degree in History. Later, he earned his Doctor of Law(JD) in Real Estate from the Benjamin N. Cardozo School of Law, University. While he was in University, he was in Moot Court Honor Society.

Brandon is a real estate advisor by profession. He is the co-founder at Current Real Estate Advisor which he co-founded in the year 2018. It is a commercial real estate firm focused on identifying the best opportunities for clients and then cultivating a long-term partnership to drive future success.

Moreover, Charnas opened his office in Miami with his partner, Adam Henick and Stefano Santoro. The star is also the principal of Warwick Capital Management, LLC from March 2015.

He was the SVP of the Merion Investment Management LP. from September 2010 to March 2015 where he served as an associate for Kirkland & Ellis LLP.

On the other side, his wife, Arielle is a fashion blogger and Instagram star by profession. She expanded her career as a fashion designer in 2017.

A famed star, Charnas has earned a handsome amount of money from his profession. He lives a luxurious lifestyle along with his family.

However, the real estate advisor has not disclosed his exact salary, earnings, and assets details till now.

Charnas’ wife, Arielle was called out for traveling to the Hamptons after they both tested positive for Covid-19. Brandon apologized to fans and followers for making hurtful comments against the criticism over how the couple handled her coronavirus diagnosis.

The dispute went further after Arielle revealed that she didn’t go through any sort of procedure to take COVID-19 tests. After the controversy, the department store, Nordstrom withdrew themselves with the blogger.

36 years old star, Brandon has handsome looks and an admirable personality. He stands at a height of 5feet 10inches. Also, he has a balanced bodyweight of 85 kg.

Furthermore, Charnas has brown eyes whereas his hair is brown.

Regarding his social media presence, Brandon Charnas is an active personality on social media. Brandon has more than 105k followers on his official Instagram account @brandoncharnas.