Brandon Cox is a former American footballer who played for a college football team. He is married and a father of one.

Brandon Cox is married to Carla Toro. They got married in 2017. The duo has a newborn baby named Peyton. They are very private when it comes to their personal life. 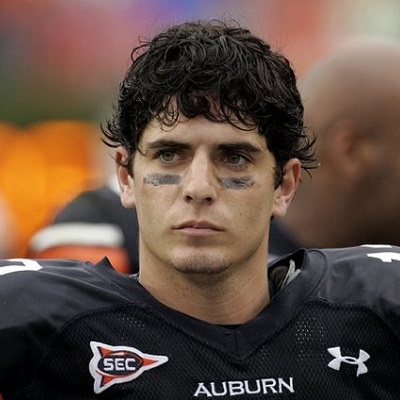 “It’s part of me now. I’m always going to be like this, so I just live with it.” ''We do chemosensitivity testing for gynecological cancers. It’s interesting. It’s something new every day. It’s not a desk job. I get to get out in the OR and see different types of OR surgical cases. I like it. It is important because we’re dealing with oncology and personalized therapy for cancer patients. It’s a new technology that, hopefully, is going to help people down the line.”

Who is Brandon Cox?

Brandon Cox is a former American footballer who played for a college football team, the tigers at Auburn University. He played as a Quarterback from 2005-to 2007 and was able to make a record of 29-9. They became the ones to win most of the matches in Auburn history, 50 games. He now works as Director of Business Development at Hoar Construction.

Cox was on October 31, 1983, in Trussville, Alabama. He was born to Terry Cox and Debbie Cox who was very supportive of her child and would always go to watch his games and matches.

He attended Hewitt- Trussville High School but soon was diagnosed with Myasthenia Gravis when he was in grade 10. But he fought with disease and recovered to continue football. In 2003, he attended Auburn University. There he played football and graduated with an economics major.

Cox stayed as a backup for one season and began to lead the tiger in 2005 leading the tiger top 9-3 finish. He returned to junior year in 2006 to lead with 11-2 finish, including a victory over Nebraska in Cotton Bowl Classic, in 2007. In the third season of 2007, he played as a starter for the tigers.

He became of the 35 quarterbacks named to the 2007 Manning Award Watch List. For much of the 2007 season, Cox struggled to find consistency behind an offensive line starting three freshmen. He was therefore benched for while in favor of freshman quarterback Kodi Burns during Mississipi State game. Then he came back and got victories over Strong teams Florida, Arkansas, and Alabama.

The Tigers won the 2007 Iron Bowl over Alabama by 17–10. The team set a school record with six consecutive wins over its rival. He became only the second Auburn quarterback to be 3–0 against Alabama, with other quarterbacks Jason Campbell being the first one.

Cox’s last win was in the 2007 Chick-fil-A-Bowl where he led Auburn past Clemson, 23–20. Cox completed a career-high 25 passes, but it was Burns who ended the game with a touchdown run in overtime.

Cox’s records in football and Net worth

He became of the 35 quarterbacks named to the 2007 Manning Award Watch List.

He is 1.88 m tall and weighs around 95kg. He is an athlete. so, it’s necessary for him to be in good shape. Moreover, he is very fit and muscular.

While attending high school, he was diagnosed with muscle problems, Myasthenia gravis. His left eye started giving him a double vision. He used to get severe headaches and also feel tired invariably. His body used to feel heavy. During the summer workouts, he could hardly finish his sprint.  In spite of such a major medical problem, Brandon continued to play for his team. He not only played but also earned wins for his university team.

You may also know about the net worth, body measurements, and early life of Brad Green, Cole Beasley, and Troy Polamalu.