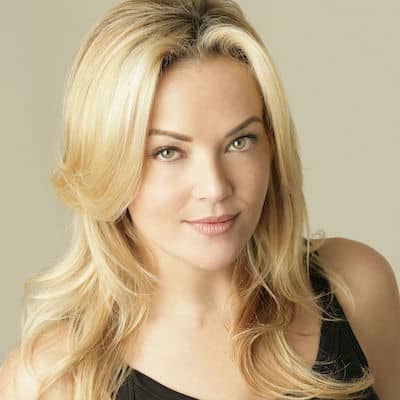 Brandy Ledford at present is married as per the reports. She said this on her Instagram account but she has not shared the details of her spouse yet.

Previously, she was married to Martin Cummins in the year 1998. Her ex-husband is an actor and together they had a child.

But their wedding ended with a divorce in 2004.

Brandy was also in a conjugal relationship with snowboarder Damian Sanders in early 1990 but the separation date is unknown.

Moreover, she also had a brief fling with Ali Joone in 2007 and Janine Lindemulder in 1993. Ali is an entrepreneur whilst Hanine is an adult actress.

Who is Brandy Ledford?

Brandy Ledford is an American-Canadian actress, dancer, and ex-model. The public noticed her for appearing in Baywatch Hawaii and Andromeda.

In addition, she is also searched by the names Jisel and Brandy Sanders. For her work in the TV series Whistler, she was nominated at the Leo Awards and Gemini Awards

She was born as Brandy Lee Ledford on 04 Feb 1969 in Denver, Colorado, USA. The name of her mother is Sandra and her father’s name is Ken.

Brandy’s ancestry is not known and has a sister and brothers.

Talking about her academics, she has attended Redondo Union High School. She studied acting at Baron Brown Studio, LA.

Brandy Ledford is popular for her acting and as she has appeared in several projects. Her first appearance was in 1993’s movie titled Indecent Behavior and Demolition Man.

She then appeared in other films as My 5 Wives, Rat Race, Ice Man, Fracture, etc. But her popularity belongs to her appearance in TV shows.

Her other notable TV acting credits are,

Regarding Brandy Ledford’s body features, her height is 5 ft 6 inches and her body weight is 50 kg. Moreover, her eyes are hazel and she also has blonde hair which is dyed.

Brandy is available on social sites. She has Instagram and Twitter accounts with more than 42k and 1k followers respectively.