Branscombe Richmond is married to Leialoha Maa, an actress on 20 July 1986. She has acted in Magnum P.I., and Jake and the Fatman along with her husband, Branscombe. They have two sons named Fairai Richmond, an actor, and Bro Richmond.

As for now he is married and living his life quite simple and uptight. 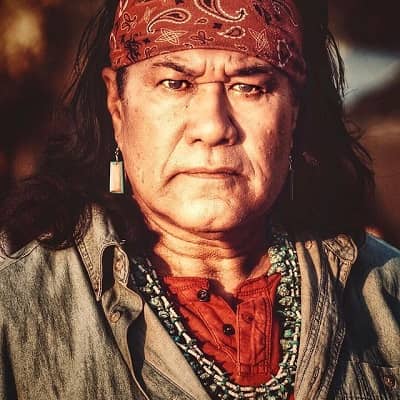 Who is Branscombe Richmond?

Branscombe Richmond is an American Supporting Actor and Stuntman.

He is known for his roles as Bobby Sixkiller on the American syndicated drama series, Renegade.

Furthermore, he has played brief roles in several popular films and tv series.

His father, Leo C. Richmond was also an actor, and his mother, Alice Kamano Richmond was a housewife. At the age of 23, Branscombe lost his father on April 21, 1979, in Los Angeles.

Sadly, his mother also passed away on June 10, 2011, due to natural causes. Likewise, he is the only child of his parents. He has kept his personal and early life confidential.

Richmond holds both American Nationality. He is of mixed (English, Native American, Native Hawaiian, French, French Polynesian, Spanish, and Portuguese) descent. Furthermore, there is no information regarding his education.

Branscombe Richmond was first featured in the tv series ‘Lanigan’s Rabbi‘ in the episode, Pilot. Later, he gained fame and recognition as Bobby Sixkiller on the American syndicated drama series, Renegade from 1992 to 1997. Furthermore, he was seen in ‘Hawaiian Heat, ‘Heart of the City’ and Roadies as the main character.

Some of his notable television appearances include series such as Jake and the Fatman, Vega$, Walker, Texas Ranger, The A-Team and The Highwayman, Star Trek III: The Search for Spock, Action Jackson, Hard to Kill, Journey 2: The Mysterious Island, Aces: Iron Eagle III, Harley Davidson and the Marlboro Man, Christopher Columbus: The Discovery, and, The Scorpion King among others. Moreover, he also voiced the character Gibraltar in Apex Legends.

He also owns a band, Branscombe Richmond and the Renegade Posse formed in 1989.

In 2021, he won the Best of Fest Award for his amazing performance in multiple films.

He has not revealed his salary; however, he has an estimated net worth of over $3M.

Branscombe Richmond is a capable actor who has gained his reputation for his clean profile and excellent works.

Richmond stands 6 feet and 3 inches tall and his weight is moderate. Likewise, he has black hair and dark brown eyes.