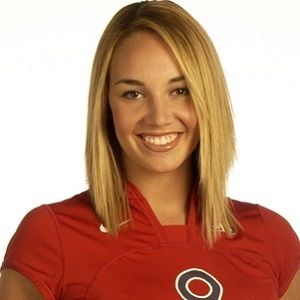 Bre Ladd is a married woman. She is married to a former professional American basketball player Luke Walton. They got engaged in 2009 and tied the knot on 17 August 2013 after dating for seven years. They got married in the ski hub of Aspen, Colorado and 200 guests were called.

They met for the first time in college at Arizona in 2002 and in 2005 the couple started dating. Now, this happy couple is blessed with two sons. The first was born in 2013 and the second in 2016. However, their names are not disclosed yet.

Who is Bre Ladd?

The former volleyball player, Bre Ladd is famous for being the wife of a basketball coach and former player, Luke Walton. Despite her career, she came to limelight after she started a relationship with him.

Bre Ladd was born in  Tucson, Arizona, the United States on April 19, 1984, and she is currently 35 years old. Her father’s name is Bob Ladd and her mother’s name is Tammie Ladd.

She has an older brother named Josh Ladd. Bred holds American citizenship, but her ethnicity is unknown. Her birth sign is Aries.

Talking about Bre’s education history, she completed her high school diploma from the Canyon Del Oro High School. Later, she enrolled at the University of Arizona.

Bre Ladd also played for four years for Club Cactus in Tucson. In fact, during her high-school days, she won the 2001 Gatorade National High School Volleyball Player of the Year.

She also won ‘Tucson Citizen’ and ‘Arizona Republic’ Arizona State Player of the year. Bre Ladd graduated from The University of Arizona and did her major in community and public health in the year 2003.

Talking about her profession, during 2001, she was in Arizona 5A South MVP while she also became the captain of the high school team in 2000 and 2001.

Additionally, Bre Ladd was also ranked first in Volleyball Magazine Fab 50 for 2002. In addition, she was the one of led CDO to Class 5A state tournament quarterfinals in 2001.

Bre Ladd was also able to become the member of the 2001 USA Junior National Team along with Arizona teammates and competed at the Women’s Junior World Championships.

Besides that, she has also served as a mentor for deaf students at the ‘Arizona School for the Deaf and Blind’ and also very much fluent in sign language. She later did her major in nursing.

As sources have calculated, Bre has a net worth of around $3 million. She has earned this sum of money from her professional career only. Likewise, her husband Luke Walton’s net worth, it is around $ 16 million as per celebrity net worth. He earns an average salary of $ 5 million.

The 35 years old volleyball player has maintained her celebrity status and has not harmed any other person in her career. However, her husband Luke Walton has been accused of sexual assault by former sports reporter Kelli Tennant. He did not deny having intercourse but denied sexual accusations.

Furthermore, rumors are that Luke to fired at the season end from the team, Lakers. However, sources say that in such a difficult time, she is very supportive of her husband.

Bre Ladd has a height of 6 feet 1 inch. Additionally, she weighs is 67Kg. In addition, she has a measurement of 38-30-37 inches and her bra size is 36B. Bred’s hair color is blonde and her eye color is blue.

Also, read the affair, salary, the net worth, controversy, and the bio of Sonya Curry, Graham McIlvaine, Evan Patak