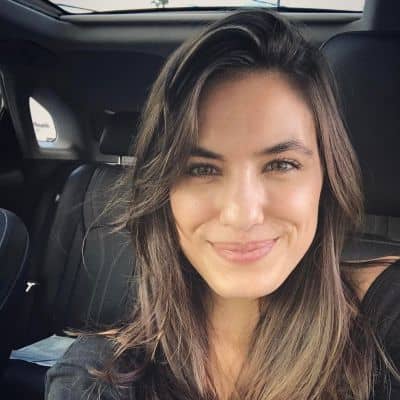 Talking about her love life, Breanne Racano is happily living a married life with Jerry Ferrara. Ferrara is a well-named American actor known for his work in Entourage, Power, Shooter, and so on. The couple married on 30 June 2017.

Additionally, the couple started dating in 2014 and were engaged 10 months before their wedding. The couple’s wedding took place in Gervasi Vineyard, Ohio. Racano had worn a dress designed by Austin Scarlett.

They performed their ceremony with the involvement of the 160 guests and for their reception, they chose to have an all-Italian menu. Presently, the couple is blessed with two sons. Their first children Jacob Michael Ferrara was born in May 2019.

Likewise, the couple welcomed their second child in April 2021. Earlier, the actress dated Sean Faris in 2009. They dated for two years and separated in July 2011.

Breanne Racano is a well-recognized American actress, TV personality, and podcaster. Racano is widely famed for Freaky Deaky(2012), Entourage(2004), and Master of None(2015).

Breanne Racano was born on 15 January 1988. At present, her age is 33 years old. Likewise, her birthplace is Ohio, the USA.

Breanne is the daughter of her mother, Becky Racano whereas her father’s details are not available. Moreover, she has a sister named Lauren Racano.

Talking about her nationality, Racano holds an American identity whereas her ethnicity is Italian.

Regarding education, the actress completed her graduation from California State University Northridge(CSUN) Mike Curb College of Arts, Media, and Communications. She completed her B.A. in Journalism and a minor in geography in July 2012.

Professionally, Breanne started her television career by featuring in the role of Jessica Hughes in an episode named Like Water for Murder of the CBS police procedural series, CSI: NY. The actress then performed the role of Robin Abbott in the 2012 crime-comedy-thriller film, Freaky Deaky.

Racano featured alongside Billy Burke, Christian Slater, Michael Jai White, Sabina Gadecki, and so on. The actress is also a podcaster who features in Bad 4 Business Podcast alongside her husband, Jerry.

Breanne in advance portrayed the role of Sandra in an episode of the comedy-drama television series, Master of None in 2017. On the other side, talking about her husband’s career, Ferrara featured for the first time in Where Go Left His Shoes in 2007.

A famed actress, Racano has earned a handsome amount of money from her profession. She has brand-endorsed Bare Collection, Matrescence Skin, Milky Mama, etc.

However, Breanne has not disclosed her exact salary, earnings, and assets details till now.

Breanne has never been part of any controversial matter or rumors till now. The actress has been preoccupied with her professional and private life.

It seems that Racano prefers enjoying her personal life and does not want to merge it with her professional life.

33 years old star, Breanne has gorgeous looks and an admirable personality. She stands at a height of 5 feet 6 inches. Also, she has a balanced body weight of 64 kg.

Furthermore, Racano has green eyes whereas her hair is brown. Her body measurement is 34-24-35 inches(chest-waist-hip) respectively.

The actress wears a dress size of 4(US) and her bra size is 34B.

Regarding her social media presence, Breanne Racano is an active personality on social media. Breanne has more than 27.3k followers on her official Instagram account @breanneracanoferrara.

She is also active on Twitter with around 6.8k followers.

However, Racano is not available on Facebook at the moment.

Also read about Breanne Racano, Raz B, and Jackson Douglas.