Renowned as Nichelle of Being Mary Jane and Connie of The man in 3B. 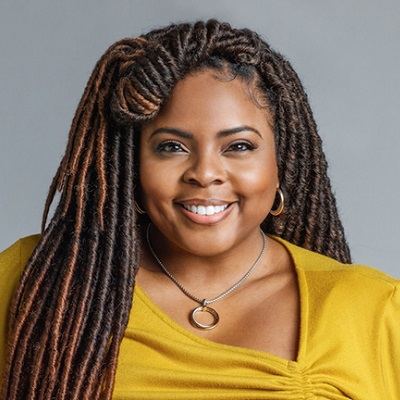 Every time you are looking for love, and you're making yourself available for love, it may not come in the package that you had dreamed of. It might come in something completely different. You might've thought, "I'm going to be with a tall, dark, and handsome." or "I'm supposed to be with a model woman who looks like she can walk on the runways." But, it might be just a little curvy girl from Oakland! : It's a true testament to say that there are no small roles in Hollywood. People say, "Oh, I just said one line." or "I was walking in the background." Don't deny humble beginnings: If you stay true to one thing, it will open up the doors to the other thing. But, you don't have to tell the people, "Oh, I can do these fifteen things." No! Just tell them you can do the one, and if you do the one well, other opportunities will be afforded you, period.

Brely Evans is married to Joe Eddings. Joe happens to be a graduate of Oral Roberts University.

Brely walked down in the aisle on the 14th of August 2016. In the wedding event, she wore a gorgeous white tradition wedding grown whereas the groom was dressed in blue Tex with brown shoes. The couple got engaged on the 8th of August.

As of now, she is living a happy life with her husband, Joe.

American Brely Evans is an actress, singer, entrepreneur, and producer. She is renowned as Nichelle of Being Mary Jane and Connie of The man in 3B.

Last, in 2020, she featured the TV movie, Steppin’ Back to Love. Also, she is the director of the TV series, Denise’s Dish.

As of now, she is filming the movie, Black Girl Magic as Marie. Also, her next movie, EnVz Studios: Relentless Love is in the verse of pre-production. She is also involved in the production of movies too.

Brely Evans was born on the 9th of December 1972 in Oakland, California. She is of Welsh ethnicity.

As of now, she has not shared any details of her parents and educational background. However, she often shares photos with her mother and father on special occasions.

In 2008, Brely Evans debuted in the movies with a minor role as Elizabeth in Outrighteous. However, she first came in the spotlight when she featured in the movie, 2010- Just Wright as Sabrina. After the role in the movies, she became a famous face in the movies.

Moving forward, she featured the movies including Note to Self, Sparkle, Black Coffee, and The Man in 3B.

Apart from the movies, she is also a well-known face in the TV world too. She has featured in TV series and TV movies too. Some of her TV series along with the year and the character name are-

Besides TV and Movies, she is also a theater artist too. As an artist, she has been part of theater plays including Two Can Play That Game, Torn Between The Two, and Gospel In a Nut Shell.

Currently, the actress is expanding her career in the field of production. Currently, she is producing the movies Black Girl Magic and EnVz Studios: Relentless Love.

Also, she has directed the TV series, Denise’s Dish. Besides that, she is involved in the online clothing business and singing too.

Through her various career option, she has managed to make a net worth of $4 million. As an actress, her earnings range from $19k to $208k. Besides that, she earns through her production lines too.

Apart from that, her earnings as a director are in the range of $31k to $218k. Also, she earns through online clothing business too.

Some of her movies’ box office collection with the year are-

As of now, she has not been through any kind of controversy that created a buzz in the media. Similarly, she has managed to remain far from any rumors too.

Brely Evans has brown eyes with back hair. Her height is 5 feet 2 inches and weighs around 68 kg.

She also has a self-titled YouTube channel with more than 92k views.