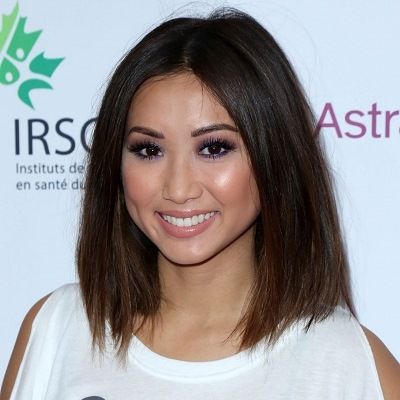 To this day, just always treat people the way you want to be treated. Whether it's family or friends or co-workers, I think it's the most important thing. Whether you have success or don't have it, whether you're a good person is all that matters.

I love to bake. I like to bake with wheat and try not to eat sugar, so I use applesauce instead, which probably sounds really gross.

I'd like to have any sort of Mexican or Italian food any time of the day!

My dad loves to cook. I'm half Thai and growing up, that's all we ate at my house. My dad was very big on the idea that dinnertime and cooking time was also family time.

Brenda Song met Raviv Ullman for the first time in 2004 when they were filming for the TV series Phil of the Future. They didn’t start dating until April 2006. The duo finally called it quits in January 2007. Brenda dated actor, Aaron Musicant for a couple of months in 2007 when they met in Tipton Hotel in Boston.

Brenda met Jesse McCartney for the first time while filming for the TV series The Suite Life of Zack & Cody in 2005 and later for the music video of Jesse’s song “Good Life”. The duo commenced dating in March 2007 until August of 2008.

Song dated actor Jason Dolley for a year from October 2008 to September 2009. Brenda and singer Trace Cyrus appeared publicly for the first-time during NYLON magazine’s Young Hollywood Event. They spent the time together and looked cozy in each other’s company. Since that time, they made numerous appearances together on the red carpet.

On October 14, 2011, People magazine announced that they had engaged. There was also some buzz about Brenda to be pregnant with Trace’s child. The couple separated in June 2012. In January 2013, they again reconciled and started seeing each other. This on and off relationship came to an end for the final time on August 2017. Brenda Song commenced dating actor Macaulay Culkin from 2017.

Who is Brenda Song?

Brenda is an American actress. Likely, Brenda Song started her career as a child fashion model. Also, she involved in film production and is widely regarded as an upcoming Hollywood diva. The American media is in quite an awe of her and includes her in the ‘rising Hollywood stars’ list, time and again.

Brenda, since her early childhood, showed enthusiasm towards dancing and other performing arts. Her father enrolled her into a martial arts class. She also wanted to take belle classes along with that, but her father disagreed. She was able to convince her mother to take her to Los Angeles, where Brenda wanted to try acting.

Talking about her education, she attended the University of California, Berkeley.

Talking about her profession, Brenda Song’s career started when a casting agent spotted her in a shopping mall. She wasn’t more than 5 years of age and her mother accepted the offer and Brenda’s very first introduction to fame happened in the form of Little Caesars commercial.

In the year 1995, she was approached to play a role in ‘Requiem’, an independent film and appeared in a few short films later. She exhibited immense confidence in front of the camera and the entire crew loved having her around. Her next appearance on television was a two-episode role in ‘Thunder Alley’ and soon after that, a regular role in ‘Fudge’ followed. Dozens of other roles followed and Song became one of the most popular child actors but was somehow type-cast to play ‘Asian’ characters.

During 2000, she was presented a couple of awards for her role in ‘The Ultimate Christmas Present’ and two years later, her performance on ‘The Bernie Mac’ show met with critical acclaim and established her as a good actor. Similarly, in 2002, Disney signed her on and she became one of the many child actors Disney channel had signed for many shows under production.

There was a rumor about Brenda Song’s pregnancy. Another rumor, Brenda dated rapper Flo Rida in May 2009. Currently, she is far from rumors and controversies.