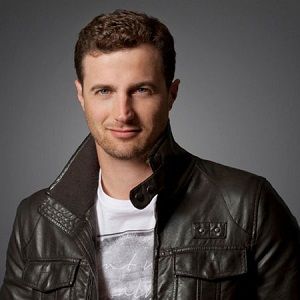 I normally play either deeply troubled people or really, really nice people. This is my first time playing a detective, or anyone with authority, for that matter. It is also the first time I have had to remember technical dialogue on a regular basis, which can be challenging.

What is the relationship of Brendan Penny?

Talking about his relationship, Brendan is a married man. He tied the knot to a marine biologist.

But he has disclosed his wife’s name public. However, in 2017 he wished his wife seventh anniversary from his twitter handle, which means they tied the knot in the year 2010.

They are blessed with two kids, whose names are unknown. They are living a happy life together with no sign of any marital affairs.

Who is Brendan Penny?

Brendan Penny is a Canadian film and television actor. Also, Brendan is a sketch comedian.

He is best known as Detective Brian Lucas in Motive, a Canadian crime drama centered on a team of Vancouver homicide detectives, also starring Kristin Lehman, Louis Ferreira, and Lauren Holly, that aired from 2013–2016.

Currently, he is starring as Kevin O’Brien in the family drama series Chesapeake Shores, which premiered on August 14, 2016.

Brendan was born in Ottawa, Ontario, Canada, to English heritage.

He spent his early life in Ottawa as well as in London.

Talking about his education and academic achievements, he attended Fanshawe College, London, Ontario, earning a BS in Accounting. Then, he attended the Lyric School of Acting, in Vancouver, British Columbia.

On talking about his profession, he began his TV career with a role in an episode of the American sci-fi TV series ‘Jake 2.0’. Then, he infected by nanobots, giving him superhuman powers.

During 2006, he also appeared in an episode of the famous American horror fantasy TV series ‘Supernatural’. In the same year, he also played an important role in the Canadian TV drama ‘Whistler’. It aired from 2006 to 2008.

On the same year 2008, he also played a supporting role in the movie ‘Poison Ivy: The Secret Society’ which was directed by Jason Hreno, the film starred actors such as Shawna Waldron, Miriam McDonald, and Ryan Kennedy in main roles. Moreover, he also portrayed Detective Brian Lucas in the TV series ‘Motive’, which aired from 2013 to 2016.

He was nominated for a Leo Award for his performance in Whistler and Motive in 2007 and 2017 respectively.

He likes to update his dog, food, and shows via his social media handle.

Rumors were that Brendan was gay. However, those were just rumors and he is a straight guy.

The average salary of a Canadian actor is estimated to be $27,300 per annum.

What are the body measurements of Brendan Penny?

Brendan has a height of  6 feet. Brendan’s hair color is brown and his eye color is grayish-blue.