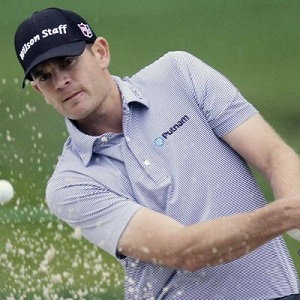 Brendan Steele is a married man. He is married to his longtime girlfriend, Anastassia Steele. The couple tied the knot in the year 2007. They are college sweethearts. There is no information on whether they have children or not.

However, the couple is living a happy married life.

Who is Brendan Steele?

Brendan Steele is an American professional golfer. He plays on the PGA Tour. In 2011, he won the Valero Texas Open. In 2016, he won the Safeway Open which was the first event of the 2017 season.

Brendan Steele was born on April 5, 1983, in Idyllwild, California. His nationality is American and his ethnicity is North American.

His mother’s name is Jana Steele and father’s name is Kent Steele. His uncle is an actor and his name is Anthony Geary. Along with living in a town without a golf course or a driving range, golf wasn’t a sport he adopted early on; he started to play the game at the age of 13.

After playing for the Hemet High Bulldogs, Steele played college golf at the University of California-Riverside, graduating in 2005.

Steele turned Professional in 2005 and played on the Golden State Tour, winning four times. In 2006 and 2007, he played on the Canadian tour, where his best finish was second at the 2006 Telus Edmonton Open. He began playing on the Nationwide Tour in 2008.

In 2010, he won the final event of the season, the Nationwide Tour Championship at Daniel Island. Steele earned his PGA TOUR card for the 2011 season and secured his first career victory at the Valero  Texas Open in April of that same year. It was a tight victory, but he holed a seven-foot par putt on the 18th hole to clinch the victory. He was the third PGA  TOUR rookie to win in 2011.

The victory earned him a TOUR card until the end of 2013, as well as invites to THE PLAYERS Championship, WGC-Bridgestone Invitational, 2011 PGA Championship, and the 2012 Masters. The win also moved Steele from 115th to 19th in the FedEx Cup Standing. On October 16, 2016, Steele won the Safeway Open by one stroke over Patton Kizzire for his second win on the PGA Tour. His winning score of -18 tied the tournament record for lowest score relatives to par.

Brendan Steele: Salary and Net Worth

He has a net worth of US$ 6 million but his salary is not revealed yet.

There are no any rumors of Brendan Steele and he has not been involved in any types of controversy.


Brendan has the height of 6 feet 2 inches. His body weighs 77kg. He has brown hair and blue eyes.