Brendon Burchard is an American Author and motivational speaker. He started as a writer from the scratch living at his then girlfriend, now wife's apartment. They married in 2008. 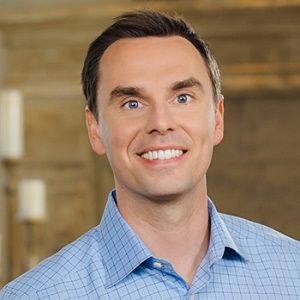 “No matter your position, circumstances, or opportunities in life, you always have the freedom of mind to choose how you experience, interpret, and, ultimately, shape your world.”

“personal power is directly tied to personal responsibility, which most people avoid.”

We learn that the more we are true to ourselves, the more we can connect with and contribute to the world.”

It broke my heart, and it forced an all-in decision: Either I was going to become a successful writer and trainer… and find a way to my vision through any obstacle, until I ended up successful… or I was going to end up with the angels for having happily exhausted myself trying to improve our lives and follow my dreams.

Brendon Burchard is married to Denise Burchard since June 2008. His wife Denise is an entrepreneur.

When they were dating, he lived in his Denise’s(then girlfriend) apartment in San Francisco. He would use the sewing table of his parents as his work table.

He praises his wife saying,

“My wife is the most extraordinary person I know.”

Who is Brendon Burchard?

Brendon Burchard is an American author, motivational speaker, and high-performance coach. He is best known for his books like ‘The Millionaire Messenger and ‘Life’s Golden Ticket’. Furthermore, his book ‘The Motivation Manifesto’ spent 32 weeks on the New York Times bestseller list.

Brendon Burchard was born in Montana, the United States of America on September 18, 1977.

He was raised by his mother Christiane Burchard in his hometown. Talking about his siblings, he has a sister.

His father, Mel Burchard was a US Marine and a French soldier who died in a war. His mother was born in Vietnam. His parents met and fell in love in Washington DC. Later, his mum moved to France.

“I have an incredible mom. And sister.”

He is of American nationality and he is of Anglo-Saxon ancestry.

Furthermore, there is no information on his education.

Brendon was in a near-fatal car accident at the age of 19. Later, his core teaching question like Did I Live? Did I love? Did I Matter?” was cited after the accident. He is also the founder of High Performance and Experts Academy.

His first book Life’s Good Ticket in 2008 was published which was an inspirational novel. Later in 2011, he got his huge fame through the New York Times Best Selling Novel called The Millionaire Messenger.

This novel was also in the USA Today and Wall Street Journal’s bestseller lists. After he went to publish best-selling books such as The Charge: Activating the 10 Human Drives that Make You Feel Alive (2012), The Motivation Manifesto: 9 Declarations to Claim Your Personal Power (2014), and High-Performance Habits: How Extraordinary People Become That Way (2017).

This motivational speaker has not involved in any controversy yet and is also there are no rumors surrounding him.

Burchard has Dark brown eyes and brown color hair. Furthermore, he has a height of 5 feet 7 inches. His body weighs 72kg.