Updated On November 15, 2022 | Published By: Akshay Boothe
Share this
Married 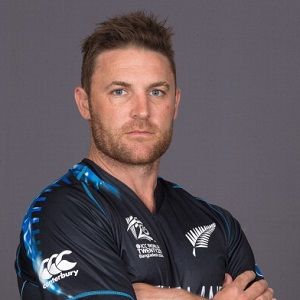 What is the relationship of Brendon McCullum?

McCullum is married to Ellissa McCullum in 2003. He also has a son named Riley McCullum and a daughter named Maya McCullum.

Who is Brendon McCullum?

Brendon McCullum is a former New Zealand international cricketer. He has played all formats and also is the captain in all forms. He is an opening batsman and a wicket-keeper.

Brendon McCullum’s full name is Brendon Barrie McCullum. He was born in Otago, New Zealand on 27 September 1981 as the son of Stuart McCullum (Father). As of 2021, he is 40 years old. His mother’s name is not known.

He has a brother named Nathan McCullum who is also an international cricketer.

McCullum completed his high school at King’s High School, Dunedin. It is a state school in Dunedin, New Zealand. His year of completion and further educational qualification is still not known.

McCullum made his debut in 2004 against England in a Test Series match. He scored his highest score, an innings of 96 at Lord’s. Later in a match against Bangladesh, he scored his maiden Test century with a score of 143.  He was dismissed with a run left for a century against Srilanka. He scored his second century with 111 against Zimbabwe.

In February 2007, New Zealand became the first team to defeat Australia in a three-match ODI series since 1997 with McCullum scoring 86 runs (not out). Later on December 31 against Bangladesh from 19 balls, he scored 50 runs. And with 28 balls he scored 80 runs including 9 fours and 6 sixes and finished his innings.

He announced his intention to retire from international cricket on December 22, 2015. In his last ODI match against Australia where he scored 47 runs to beat Australia on 8 February 2016. New Zealand won the Chappell-Hadlee Trophy 2-1.

McCullum was given the guard of honor while entering the field on 22 February 2016. He played his last innings against Australia in a Test match.

In his domestic career, he played in the final against Auckland Aces and scored 170 runs to win the State Shield for Otago Volts. With this score, he set the record of the highest score by any player in a domestic one-day match.

In 2006, he opened the batting for Glamorgan against Leicestershire and scored 160 runs. On 24 January 2009, he played in the final of the Australian KFC 20-20 big Bash for New South Wales.

Following his retirement from international cricket, he signed for NatWest T20 Blast.  And later in September 2016, he signed for the 2017 season with the Lahore Qalandars as the team’s captain.

He has also played in the Indian Premier League since 2008 starting with Kolkata Knight Riders. And later on with Kochi Tuskers Kerala, Chennai Super Kings.

He is currently playing for the Gujarat Lions.

He scored 185 runs in the match which was the highest score ever by the wicket-keeper of New Zealand. He scored 339 runs in partnership with Martin Guptill and set the highest sixth-wicket partnership record. By just 12 runs they missed in setting the world record.

On 21 September 2012 McCullum set a record for the highest 20-20 international innings with the run of 123 against Bangladesh.

Brendon became the first New Zealand batsman to score a triple century in a match against India in 2014. He was also named New Zealander of the Year that year. Brendon also won the New Zealand Sportsman of the Year.

He was appointed as an Officer of the New Zealand Order of Merit for the services to cricket in the 2015 Queen’s Birthday Honors.

In 2016 He won the New Zealand Leadership award.

Brendon McCullum: Salary and Net worth

McCullum has a salary of NZD 700k playing for the Gujarat Lions and has a Net worth of $6 million as of 2022.

FolloMcCullum has apologized to the Kumar Sangakkara for a controversial run-out of Muttiah Muralitharan. There is a rumor that replacing Ross Taylor for the captaincy was a part of the controversy McCullum. He revealed that Taylor did not communicate to share his thoughts in a team meeting.

McCullum has a height of 5 feet and 7 inches. He has a body measurement of 41 inches (chest), 31 inches (waist), and 15 inches (biceps). He has dark brown hair and blue eyes.

Also get to know more about the birth facts, education, career, net worth, rumors, height, and social media of different personalities like Shane Watson, Merv Hughes, and Sarah Taylor.