Brenock O’Connor is currently single and is not dating anyone. He has not disclosed anything regarding his love life relationships.

He is presently more focused on his career than on relationships and hookups. However, his silence has led the public to believe that he is single. 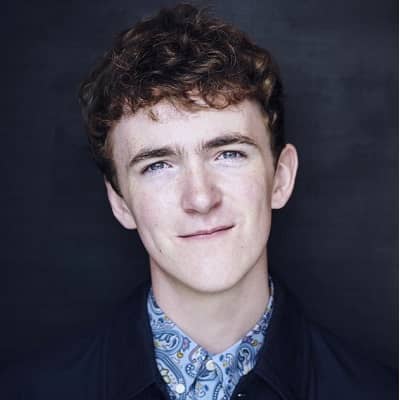 Who is Brenock O’Connor?

He has not disclosed anything regarding his family background and siblings. Talking about his nationality, he holds a British identity.

O’Connor attended St Oscar Romero Catholic School in Goring as a child and went on to The Theatre Workshop Stage School in Brighton to study theatre. He began acting on stage at the age of six in the Hammond Pantomimes at Worthing’s Pavilion Theatre, where he also won a theatre scholarship.

Brenock began his acting and singing career when he was just six years old, in 2006. Soon, he grew more successful in his industry in a short period of time, influencing people via his career and gaining a great deal of reputation.

In 2014, O’Connor got his big break as Olly in HBO’s epic television series Game of Thrones. O’Connor appears in seventeen episodes over the course of the series, with his final appearance in the sixth-season episode “Oathbreaker,” in which a resurrected Jon Snow hanged him. Regarding his character Olly’s betrayal of Jon Snow in the fifth-season episode “Mother’s Mercy,” O’Connor noted that he received both critical and favorable feedback from fans of the show about his performance in the part.

O’Connor has also played Peter Cratchit in the BBC One series Dickensian, which debuted in December 2015. He also starred in Young Hunters: The Beast of Bevendean, a British children’s adventure film released in 2015.

He’s starred in a music video with Noah and the Whale, as well as various Haribo commercials and one episode of Holby City as a lead character. In addition to acting, O’Connor is a singer and guitarist who has a YouTube channel with various cover songs.

O’Connor was cast in 2019, as Conor Lawlor in the musical adaption of Sing Street, based on John Carney’s 2016 film of the same name, which was also adapted for the stage as a musical.

In the 2020 television series of the same name, O’Connor auditioned for the role of Alex Rider but was eventually cast as Tom Harris, Alex’s best friend.

Brenock’s net worth is believed to be around $1.5 million, which appears to be sufficient for him to live a comfortable life. Brenock’s annual and monthly earnings have yet to be revealed.

Owing to his long professional experience, O’Connor has kept a clean image and appears to be avoiding rumors and controversies. He hasn’t been the subject of any unwanted rumors or publicity.

Brenock stands tall at a height of 5 feet and 8inch and weighs around 55kgs. There is no further information available regarding his body measurements.

He has a fair skin complexion with beautiful blue eyes and light brown colored curly hair.