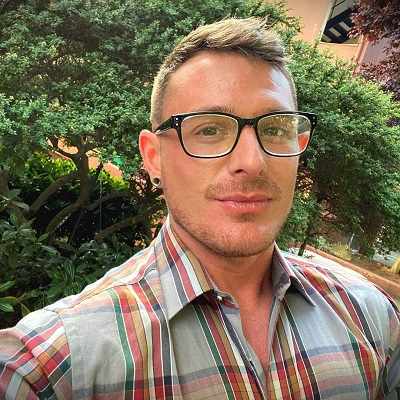 Brent Corrigan has not officially declared his relationship status. However, a few of his Instagram posts suggest that the actor is in the love.

As of now, he has not shared the information about his partner. In one of the picture’s caption, he is calling his partner, Coach.

Previously, he was in a relationship with the actor, JJ Knight. They started dating in 2016. After one year of dating, they got separated from each other.

Before that, his partner was Bryan Kocis, the owner of Cobra Video.

Who is Brent Corrigan?

American Brent Corrigan is a gay adult actor, film actor, and director. He is renowned as Chris Wachowsky of Judas Kiss and Jonathan of Kissing Darkness.

Brent Corrigan was born on 31st of October 1986 in Lewiston, Idaho, U.S. His birth name is Sean Paul Lockhart. He is of British-Scottish-Germanic ethnicity.

His mother is a ski instructor by profession. He was brought up in at the suburb of Mill Creek in Seattle, Washington along with her step-father. When he became 8 years old, his mother and step-father got divorced. After that, he moved to San Diego along with his mother.

He has three siblings; including an elder brother and younger sister and brother. Details on his academics are not available.

In 2007, he started working for the Pink Bird Media and Falcon Studios as the adult star. Some of his adult videos along with the year and production house-

Apart from adult movies, he has also featured in the general movies too. In 2007, he made his acting debut with the short musical, Didn’t This Used to Be Fun? The following year, he appeared in the romantic comedy, Another Gay Sequel: Gays Gone Wild! as Stan.

Apart from that, his earnings as a film director range from $30k to $215k.

Brent Corrigan has brown eyes with brunette hair. He stands at a height of 5 feet 6 inches and weighs around 73 kg.

However, the death of his partner, Bryan Kocis became of controversy. Kocis was found murdered at his home on 24th January 2007. For the murder of Kocis, Joseph Kerekes pled guilty and was sentenced to life in prison without parole.

Brent is active on Twitter with the handle, @BrentCorrigan with 481.6k followers. He is not available on Facebook.

On the platform, he is following the personalities like Adam Lambert, Ashley Parker, and Liam Riley. Also, he has 16.3k followers on Instagram.