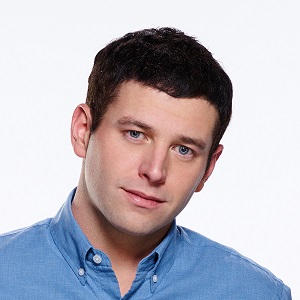 Brent Morin is in a relationship. He is dating a girl named, Angie Simms. She is an American actress best known for her role Hunter on the TV series Online Gamer. He keeps sharing the pictures of them on his social media handle with cute captions.

Who is Brent Morin?

Brent Morin is a Los Angeles-based American comedian, actor, and writer. He is best known for playing the lead role of hopeless romantic and uptight roommate Justin Kearney on the NBC multi-cam comedy Undateable from 2014 to 2016. He is also famous for his role as Special Agent Hobbs on the 2016 web series Crunch Time.

Brent Morin was born on 31 August 1986, in South Windsor, Connecticut, USA. Both of his parents are teachers. His elder brother is a concert pianist and his younger brother is a professional figure skater.

He graduated from South Windsor High School. His nationality is American and he is of Irish and Italian ethnicity. Morin moved to Los Angeles at 18 to study at a film school at Columbia College Hollywood and graduated with a film degree. Later, he started doing stand-up and eventually decided that was what he wanted to do.

Brent has been an active member in the industry since 2011. He began his career as a comedian with the famous Stand-up comedy show called Comedy Juice in 2011. He also worked as a production assistant on The Tonight Show with Conan O’Brien on NBC and continued with Conan on TBS.

Morin has appeared regularly as a stand-up comic on shows with The Comedy Store, The Improv, and Laugh Factory.  From 2014 to 2016, Morin co-starred in the NBC series Undateable as Justin Kearney. In 2016, he was cast for the web series, Crunch Time. His net worth is $2 million to the media.

He has a height of 6 feet with a bodyweight 82 kg. He has black hair color and his eye color is dark brown.

Brent Morin’s Dating tips for those who are thinking of it. Let’s know them!!