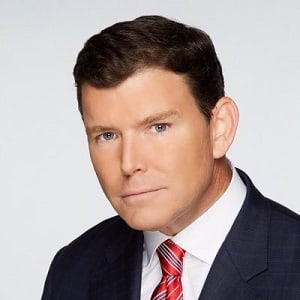 What is the relationship of Bret Baier?

Bret Baier is a married man. He is married to Amy Baier. The pair married on 9 October 2004.

They have two children from this marriage, Paul Francis Baier, and Daniel Baier. The marriage is going strong as there is no news regarding any extramarital affairs at present.

Who is Bret Baier?

Bret Baier is an American news anchor. He is the host of ‘Special Report with Bret Baier’ on the Fox News Channel.

Baier was born in Rumson, New Jersey on August 4, 1970, to parents Bill and Pat Baier. He was raised Catholic. Additionally, he also served as an altar boy in his youth.

He is of American nationality. Furthermore, he belongs to a mixed ethnic background of German and Irish.

Talking about his education, Baier attended Marist High School. In addition, he also attended DePauw University in Greencastle. He graduated in 1992 with a BA degree in political science and English.

Baier initially worked at a local station in Rockford, Illinois. Later, he joined WRAL-TV. Additionally, he also joined CBS soon after. After sending an audition tape to Fox News in 1998, he was hired as Atlanta bureau chief. He then took 11 trips to Afghanistan and 13 trips to Iraq. In 2007, he became the Fox News’s White House correspondent.

Baier has an estimated net worth of around $65 million as of 2022, and his salary is $7 million at present.

Baier became part of controversy after there were errors in one of his reporting on Hillary Clinton’s Clinton Foundation and State Department. He later apologized for his news stories. Furthermore, some of his other reporting has received several criticisms over the years. At present, there are no rumors concerning Baier and his career.

Talking about his body measurement, Baier has a height of 1.8 m. Additionally, he weighs around 75 kg. Furthermore, his hair color is dark brown and his eye color is blue.

Also know more about the early life, career, net worth, relationships, and controversies of other news anchors like Adam May (News Anchor), Christi Paul, Stephanie Sy, and Ernie Anastos.

Fox News’ Bret Baier’s Car crash incident! Who is his wife, also know about his family, wedding, and children