Bret Ernst is a Comedian, Constitutionalist, Breakdancer, Actor on Cobra Kai. Bret is married to his girlfriend, Kristin.

Bret Ernst is a married man. He is married to Kristin Nicole Kandrac. She is an actress.

The couple tied the knot on September 21, 2013, at Gervasi Vineyard in Canton. His brother, Keith was his best man during the wedding. They went for their honeymoon on the Caribbean cruise. They do not have any children yet. 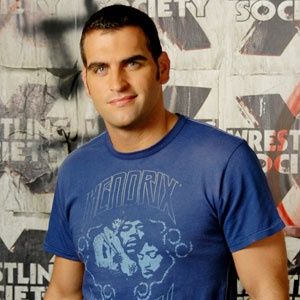 Vince really respects what we do as far as stand-up comics go. He's really an amazing individual as far as his work ethic and his character. [He and his staff] put this all together in pretty much four weeks, which is unbelievable. The idea of doing it for charity just motivated him even more.

Who is Bret Ernst?

Bret Ernst is an American international stand-up comedian. He has ranked No.16 in 101 FUNNIEST COMEDIANS WORKING TODAY by TBS on heckler.com.

On the show, Wild West Comedy Show: 30 Days and 30 Nights, he was one of four comedians along with Ahmed Ahmed, John Caparulo, and Sebastian Maniscalco.

Bret was born in Princeton, New Jersey, United States. He was raised in Passaic, New Jersey. His birth date is unknown but looking at the pictures, he is most probably in his early 30’s.

Furthermore, his nationality is American and his ethnicity is Mixed(German and Italian). His father’s name is Carol Russo and his mother’s name is unknown.

He has two brothers: Scott Ernst and Keith Ernst. His elder brother, Scoot was a theatre actor but passed away at the age of 33 while his younger brother, Keith is also a standup comedian.

He graduated from Plantation High School in Plantation, Florida. He has an interest in sports during his college days and he played college football. Later, he attended Long Island University and graduated from there.

Bret Ernst started his career as a comedian performing in local areas. In 2006, he has appeared in Wrestling Society X as a commentator on MTV. Gradually, he was featured on the television programs like Comedy Central Presents and The Late Late Show with Craig Ferguson.

He was the host of the show, Love Games: Bad Girls Need Love Too, the first season. He was featured in the pop singer Ke$ha’s music video, Blah Blah Blah. His show on Comedy Central was voted “TOP 5” in 2010 while his first comedy album American Comic was broke all the records and was ranked “TOP 10” on iTunes in its first week itself.

Apart from this, his upcoming projects are a documentary on A FATHERLESS GENERATION featuring Anthony Anderson, Terry Crews, and George Lopez.

Ersnt has had a huge career success which pays him very well. His net worth is estimated to be $10 million and his salary is unknown.

Bret being a comedian has to keep making jokes about himself, his family members, public figures, etc. Despite this, he has maintained a good relationship with everyone. Hence, there are no rumors or controversies regarding him.

Bret Ernst’s hair color is dark brown and his eye color is blue. He has a muscular body with attractive features. There is no information on his height, weight, shoe size, etc.

Being a comedian, he is active on social media. He keeps sharing his personal as well as forwarded jokes with his fans and followers. He has over 48.6k Facebook followers, over 20k Twitter followers, and over 6.4k Instagram followers.