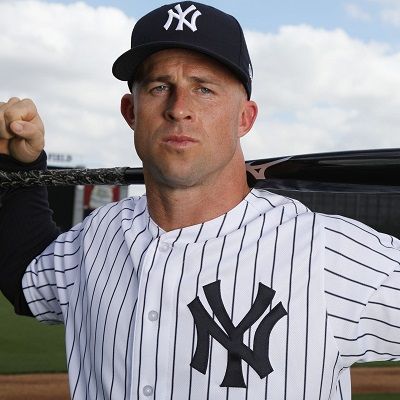 Every day that goes by and we don't win a ballgame, that's a missed opportunity for us to battle back

I never go up there trying to hit a home run

I take a lot of pride in playing for the Yankees, and trying to do things the right way.

Brett Gardner is a married man. He is married to Jessica Gardner who is his longtime girlfriend. They married on 1st December 2007. Brett proposed Jessica for a wedding. It was the time of the spring training and they were on a beach in Clearwater, Florida.

Their marriage was held at 1st Presbyterian Church on Peachtree in the presence of their friends and family. Talking about their reception, it was held at the Piedmont Driving Club in Atlanta.

Since the year 2007, they have been together and live a happily married life without any divorce rumors. The two are the parent of two sons Hunter Clendenin and Miller Clendenin.

Who is Brett Gardner?

Brett Michael Gardner is an American professional baseball outfielder who made MLB debut in 2008. He plays in Major League Baseball (MLB) for the New York Yankees. Similarly, he was a part of the Yankees’ 2009 World Series championship team over the Philadelphia Phillies.

He is the winner of the Gold Glove Award winner. Likewise, he is the third-best player of the American League.

Brett was born on 24th August 1983 in Holly Hill, South Carolina. He was born to father Jerry Gardner and mother Faye Gardner. Likewise, he is the grandson of William Mack “Bill” Gardner and Mae Gasque. He was raised in a farm in Holly Hill(2,600-acre) which was owned by his father.

He has a brother named Glen Gardner. Brett belongs to American nationality and his ethnicity is mixed (English, Irish, German, Scottish and French).

Brett educated from Holly Hill, South Carolina where he played for the school’s baseball team. In the year 2001, he attended the College of Charleston.

When Brett was in Holly Hill Academy he played for the school’s baseball team. For St. George Post 105, he played the American Legion Baseball. In the year 2001, he walked-on tryouts for the baseball team at the College of Charleston Cougars. He had a batting average of .397 in the year 2004. But he was not selected in the 2004 MLB draft.

Brett was selected in the New York Yankees in the 3rd round with the 109th overall selection. At that time he received a signing bonus of $210,000. On 30th June 2008, he was called up and he made his major league debut. He had a batting leadoff and went 0-for-3 with a stolen base.

He scored the final run of Major League Baseball in Yankee Stadium history as a pinch-runner. In the year 2009, he was named the Yankee’s starting center fielder for the 2009 season. He began the 2010 season as the Yankees’ starting left fielder. Similarly, he finished the season with a .277 batting average and 47 stolen bases in 150 games.

In the 2012 season, Brett signed a contract with the Yankees for $2.8 million. He hit his first career walk-off home run on 11th August 2013 with two outs in the bottom of the 9th inning. Again on 23rd February 2014, they agreed to a four-year contract o $52 million.

There was a time when Brett was considered one of the fastest players in Major League Baseball. He is famous for stealing bases and being very disciplined at the plate. His contact with 93% of his swings is considered third-best in the American League.

Furthermore, he saw more pitches per at-bat than any other player of the American League in the years 2010 and 2014.

The estimated net worth of Brett is around $40 million. At present, he signed a 1-year extension contract with the New York Yankees which was worth $7.5 million in which $7.5 million is guaranteed and he receives an annual salary of $7.5 million.

Brett has an interest in cars. He has a collection of many cars which include Nissan, Range Rover, Mercedes, and many others. He purchased a lavish mansion in Summerville, South Carolina for $1.1 million in the year 2011.

In August 2019, Brett was suspended and he had to be restrained in a controversial incident in the Yankees’ game against the Blue Jays. Chris Segal was the one who is responsible for this during the top of the fourth inning. The reason was that he thought Brett was yelling at him from the dugout.

But the camera angles suggested that other Yankees were the ones to yell and not Brett. After the ejection, he seemed incredulous and walked out of the dugout saying that he did not say a word.

He is 5 feet 9 inches tall and weighs around 88 kg. Likewise, he has blue color eyes and he is bald.

You may also read the age, parents, career, net worth and body measurement of Dale Murphy, Vladimir Guerrero, and Tom Glavine