Brett Hull is a Canadian-American former ice hockey player. He is married and a father of three.

Brett Hull is a married man. He was married to Alison Curran on 23rd May 1997. He has three children with her. His children are Jude(son), Jayde(daughter) and Crosby(daughter).

But they divorced in and he is married to Darcie Schollmeyer on 21st July 2006. They live together in St. Louis. 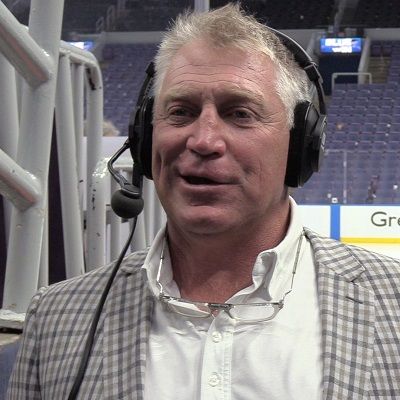 There are so many unbelievable words... But that doesn't mean I have a favorite word.

Sometimes guys need to cry. Some hockey players think they're too tough to cry.

I admire Miken's exceptional engineering capabilities and was drawn to their passion for hockey and drive to be the best in all they do.

Who is Brett Hull?

Brett Hull is a Canadian-American former ice hockey player. He is currently an executive vice president of St. Louis Blues of the National Hockey League(NHL).

Similarly, he played for the Calgary Flames, St. Louis Blues, Dallas Stars, Detroit Red Wings and Phoenix Coyotes between the year 1986 and 2005.

He was born on 9th August 1964 in Belleville, Ontario, Canada. He is the son of Bobby(father) and Joanne(mother). Similarly, his father was a long-time professional hockey player in both the National Hockey League(NHL) and World Hockey Association (WHA).

Likewise, his mother was an American professional figure skater and taught him how to skate. He has four siblings in which three brothers are Bobby Jr., Blake, and Bart. He has a younger half-sister named Michelle.

Besides, he belongs to American-Canadian nationality but his ethnicity is unknown.

Talking about his education, he attended Argyle Secondary School, St. John’s-Ravenscourt School, and Penticton Secondary School. Similarly, he accepted a scholarship to play for the University of Minnesota-Duluth(UMD).

Talking about his career, he has a total of 741 goals in the fourth highest in NHL history, and he is one of five players to score 50 goals in 50 games. Similarly, he was a member of two Stanley Cup winning teams 1999 with the Dallas Stars and 2002 with the Detroit Red Wings. In the year 2017, he was named one of the 100 Greatest NHL Players in history.

Moreover, known as one of the game’s greatest snipers, he was an elite scorer at all levels of the game. Similarly, he played college hockey for the University of Minnesota-Duluth Bulldogs, where he scored 52 goals in 1985-86. After that, he scored 50 the next year with the Moncton Golden Flames of the American Hockey League and had five consecutive NHL seasons of at least 50 goals.

Likewise, having dual citizenship in Canada and the United States, he was eligible to play for either Canada or the United States internationally and chose to join the American National Team. Also, he was a member of the team that won the 1996 World Cup of Hockey and was a two-time Olympian, winning a silver medal at the 2002 Winter Olympics.

Similarly, he was inducted into the Hockey Hall of Fame in the year 2009, joining his father Bobby to become the first father-and-son pair of players in the Hall. Furthermore, they are the only pair to each score 1,000 career points in the NHL. Likewise, his jersey number 16 was retired by the St. Louis Blues.

Brett has the estimated net worth of $15 million as of 2022. Similarly, a former NHL player earned $54,916,700 as salary playing over 20 seasons. As he is currently serving as an executive vice president of the St. Louis Blues of the NHL, his annual salary is estimated no less than the six digit figure.

In the year 2018, he purchased $2.1 million worth mansion in Nashville, Tennessee. The 7,000-square-foot home in College Grove has five bedrooms, 6.5 bathrooms, a fully finished basement and a five-car garage, “plus golf cart space,”

Talking about his body measurements, he has a height of 5 feet 11 inches and he weighs around 91 kg. His hair color is salt and pepper and he has blue color eyes.