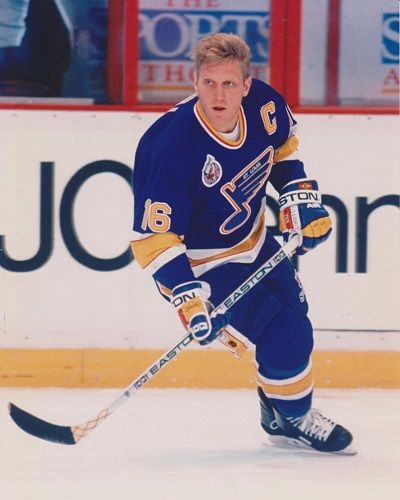 They don’t have any children together even though they have been married for 14 years now. Similarly, they live together in St. Louis.

Previously, Brett was married to Alison Curran. They walked down the aisle on 23rd May 1997. They were blessed with three children Jude, Jayde, and Crosby. But their marriage did not work out and they divorced.

Brett scored his 80th goal of the season in the St. Louis Blues 2-1 victory over the Washington Capitals in 1991. He was the third person after Wayne Gretzky and Mario Lemieux to eclipse 80 in a season.

Brett scored an incredible 741 goals in 18 seasons in the NHL. The St Louis Blues legend and Hall of Fame forward are still 38 goals ahead of Alex Ovechkin in his chase for the top spots on the all-time scoring list.

“Internally absolutely, it’s the greatest feeling in the world when you score at home and you got 20 000 people and you know they are all going crazy because of what you just did,”

“But it’s almost better when you can’t hear 20 000 people on the road. Because you just did the same thing.”

Moreover, he won two Stanley Cups, one with Dallas and one with Detroit, and also brought home a gold medal in the 1996 World Cup. Hull added,

“I wanted to be completely invisible out there or tried not to celebrate. If I embarrass ChrisChelios by celebrating and acting and he’s gotta go back to he bench,”

Also read Former NBA player and ex-husband of Khloe Kardashian, Lamar Odom has given his life to God after he was miraculously saved due to God’s mercy!

In the year 2018, Brett purchased $2.1 million worth mansion in Nashville, Tennessee. The 7,000-square-foot home in College Grove has five bedrooms, 6.5 bathrooms, a fully finished basement, and a five-car garage.

Likewise, in 2016, he listed his six-bedroom, seven-bathroom Brentmoor Park home for$3.7 million. The price was later lowered to $2.9 million. Similarly, Brett bought the Clayton house in 2014 for $2.2 million.

Hull owned two eateries in St. Louis. Also, he was was a co-owner of a junior team in the North American Hockey League, the St. Louis Bandits.