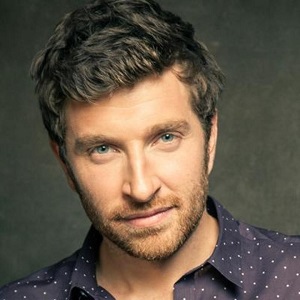 I think everybody has somebody for them, and they're out there waiting for you somewhere

Albeit Brett Eldredge is an athletic and tall personality, he is presently not in any confirmed relationship.

Eldredge is also sometimes highlighted due to some men having a gay crush with his fine looks and beautiful voice.

Talking about his ex-girlfriend, few fans expressed their view of Eldredge to be in a relationship with a hot and gorgeous Victoria secret agency model Rachel Hilbert who featured in his own single ‘Lose My Mind’ music video mainly because of a photo of Brett serenading her in a crowd.

The doubt was almost deep-rooted when Rachel showed up in some of his shows and ‘Meet and Greet’ programs.

When Brett discusses his relationship status (single) in any interview, he never forgets to point out about his career to be more vital than being in a relation as his career does not support him to be a high potential guy for a long lasting relationship.

Who is Brett Ryan Eldredge?

Brett Ryan Eldredge is an American country singer and a songwriter who got the opportunity to turn on the limelight over him with his greatest hits “Mean to me”, “Beat of the Music”, and “Don’t ya”.

Eldredge was nominated to perform “FOREVER COUNTRY” which celebrates 50 years of CMA awards and later released his first Christmas album ‘GLOW’ in October 2016.

Brett was born on 23 March 1986, in Paris, Illinois, United States. His nationality is American and his ethnicity is mixed(English, German, Swedish, Dutch).

He is the son of Christopher Chris Eldredge(father) and Robin Beth Vonderlage(mother), raised in Paris, Illinois was already a ‘singer of demand’ at 15 in local functions and turns out to be a loved and famous singer Brett Ryan Eldredge who moved to Nashville(city of music) just for the sake of his fostering interest in music.

His cousin Terry Eldredge is a member of ‘The Grascals’ but, Brett is a voice of his own kind and is proving to be an exception in his family.

He never considered the guitar bought by his parents as the accurate choice of learning music but, admits that the wireless microphone with the heavenly music of singers like Ray Charles, Frank Sinatra, and Bobby Darin was the groundwork of his musical training.

Brett Eldredge transferred from Elmhurst College in Chicago to Tennessee State University after getting inspired by his cousin Terry Eldredge when he heard him play in the Station Inn.

In the due process of performing at songwriters’ night in the Nashville area, Brett Eldredge signed for ‘Atlantic Records and released his debut single “Raymond” in September 2010 which got the attention of a decent number of acclaims and accomplished #23 in Billboard Hot Country Songs Chart.

After a moderately eminent single “It Ain’t Gotta Be Love”, “Don’t Ya” was an ideal hit for Eldredge peaking to #5 on US Hot Country Song chart, #1 on the US Country Airplay Chart, and #3 on Canadian Country Chart selling over a million units.

“Lose my mind” is a song from his album “Illinois” which he sang in the opening of the Taylor Swift “RED” Concert Tour and he also performed at Grand Ole Opry.

In September 2015, he released the album “Illinois” expanding his stardom in a Country Genre because of the singles “Lose My Mind” and “Drunk on Your Love” which peaked at #1 and #2 on US Country Airplay Chart respectively.

There is no information regarding his salary. He has an estimated net worth of $5 million.

In addition to all the gossip that hits the market, Brett Eldredge always remains untouched by any kind of audience-made rumors. But, being gay is the only one that connects to the personal news of Brett Eldredge just because of his tendency to stay single.

Brett Ryan has a height of 6 feet 4.5 inches. His body weighs 94kg. He has light brown hair and blue eyes. His shoe size is 14US. Further, there are no details regarding his body measurements.

Also know more about the early life, career, net worth, relationships, and controversies of other singers and songwriters including Alexandra Lenas, Brandy Norwood, Lyrica Anderson, Evan Dando, and Peter Andre.