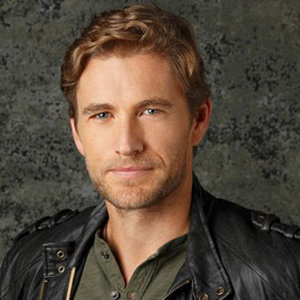 Brett was linked with several top-notch Hollywood celebrities in the previous years. In 2008 he was in a relationship with Eliza Taylor.

Taylor was 17 years younger to Brett that must be the reason that their relationship did not last too long. Although the spit up abruptly but stated that they did it on mutual understanding.

Later Brett was in a relationship with Trilby Glover.

Although they haven’t spoken about it, friends have confirmed that they are in a relationship over 6 months and have planned to marry soon.

Who is Brett Tucker?

Brett Tucker is an Australian Actor and singer. He is widely known for his role in Neighbours as Daniel Fitzgerald.

He also played in McLeod’s Daughters and The Saddle Club. He also worked in Thor: The Dark World.

Brett Tucker was born Brett Alan Tucker on May 21, 1972, in Melbourne, Australia. His nationality is Austrailian and ethnicity is Aussie.

He is the son of Ken(father) and Janice Tucker(mother). Brett grew Yarra VallyaVally, Victoria, Australia with his two brothers and one sister named Mark, David, and Nicky.

Brett studied in National Theatre Drama in Melbourne He did his acting Debut in 1994.

Brett’s experience includes Mall Boy, which received critical acclaim at the Cannes Film Festival.  He has worked in The Woman in Black in 2006 and The Great Gatsby playing Jay Gatsby’ in 1997, Neighbours till 2007.

He left the show to pursue his career as an actor in States. In the year 2005, he played a small role in the movie The Great Raid and The Outsider.

He also played the movie Criminal Behaviour and appeared in Mistresses as Harry Davis. Brett performs with a band called The Budgie Smugglers.

He has a net worth of $ 500 thousand but his salary is not revealed yet.

Once it was rumored that Brett is in a relationship with Lindsay Lohan because they were spotted together in many places but later they made it clear that they are just friends and there is nothing more in their relationship.

Brett Tucker has a height of 6 feet 2 inches. His body weight is not known. Besides these, he has golden brown hair and blue eyes.

Also know more about the early life, career, net worth, relationships, and controversies of other Actors and singers including Brandy Norwood, Amandla Stenberg, Vice Ganda, Brandon Gomes, and Alexander Ludwig.