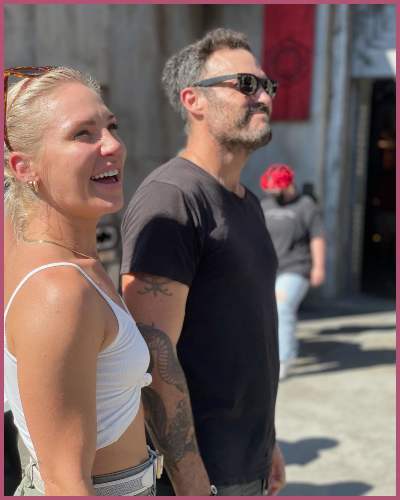 Brian Austin Green, 48 is an American well-renowned actor. He rose to prominence after appearing as David Silver on the television series ‘Beverly Hills, 90210’.

Further, he has also appeared in a couple of hit TV series including Terminator: The Sarah Connor Chronicles, Freddie, Wedding Band, and Anger Management.

Additionally, he has won the Young Artist Award for Beverly Hills, 90210 in 1992, and Adventures in Babysitting in 1990. Some of his notable works in movies are Ben in Fish Without a Bicycle and Joe Holmes in Chasing Titles Vol. 1, and a few more.

The 48-years old actor is currently in a relationship with Australian ballroom dancer Sharna Burgess. Sharna is as well as a reality TV personality who gained recognization after appearing on the ABC series Dancing with the Stars.

She is also known for her work as an assistant choreographer for ‘So You Think You Can Dance’. The two have been in a relationship since 2020. The couple sparked dating rumors after being spotted together filling a PDA while Hawaiian vacation in December 2020.

After that, the professional dancer then hinted at the romance revealing she was seeing someone new while interviewing with Us Weekly.

“It’s been really awesome. I actually am not on the market anymore. But it’s very new and very, you know, it’s dating, essentially. No one’s calling us a relationship yet.”

In January 2021, the lovely couple then went Instagram official with their relationship. Burgess shared a post, a steamy photo of them kissing on a balcony. Sharna confessed that dating during the coronavirus pandemic has even brought them closer.

The couple also together participated in season 30 of Dancing with the Stars on Season 30. The two together appeared as a dancing partners on the show.

However, the two didn’t go so far in the competition.

How many children does Brian Austin Green have?

Brian Austin Green is expanding his family with girlfriend Sharna Burgess. The couple is now expecting their first child together.

Brian is already a father to four children; three children with ex Megan Fox and another from a previous relationship with Vanessa Marcil. This will be his fifth child.

In earlier February, the couple confirmed their pregnancy news by posting several snaps from their maternity shoot. The actor shares three sons, Journey, 5, Bodhi, 7, and Noah, 9, with his ex-wife Megan Fox.

Similarly, he shared his eldest child, Kassius, 19 with Vanessa Marcil.

Brian and Megan’s divorced finalization is still pending. Although they have an on-and-off relationship, the couple has been married for almost ten years. The two have agreed to joint legal and physical custody of their three sons.

On the other hand, Megan has now moved on with Machine Gun Keely.

Also read “All about the relationship of Brian Austin Green and Sharna Burgess celebrating a one-year-dating anniversary!”