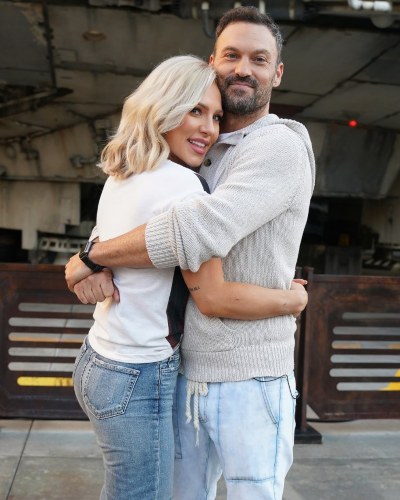 “1 year of accepting me in a way I’ve never been loved before #damnimlucky,”

Likewise, Sharna also gave a tribute to boyfriend Brian on Instagram on 17th October 2021 with a picture of them kissing. She wrote,

“He doesn’t ‘make me happy,’ I was already happy before him. But holy s–t does he amplify the f–k out of my happy. #1year.”

Brian and Sharna were seen kissing each other while they were vacationing in Hawaii together. Likewise, the couple was hugging and wiping sand off each other during their little vacation. They confirmed the relationship on social media on 1st January 2021. The couple met each other through a mutual friend and Brian had good words to say about Sharna.

More on their romance

Few months into their relationship, they celebrated their first Valentine’s Day together. Green did not hesitate to confess his feelings for Burgess. Similarly, Sharna has won the hearts of Brian and Megan Fox’s children. She is seen spending time and going out with the babies.

Moreover, the couple participated in Dancing with the Stars and earned 24 out of 40 during their first dance on season 30. Their love connection has been going really strong. Megan is madly in love with Machine Gun Kelly so is Brian with Sharna.

Brian Austin Green is an American actor. He rose to prominence after appearing as David Silver on the television series Beverly Hills, 90210.

Furthermore, he has also appeared in a couple of hit TV series including Terminator: The Sarah Connor Chronicles, Freddie, Wedding Band, and Anger Management. Additionally, he has won Young Artist Award for Beverly Hills, 90210 in 1992, and Adventures in Babysitting in 1990. Read more bio…

Jason Gotay and Michael Hartung made it to the aisle!
Tags : Actor Unwed Father