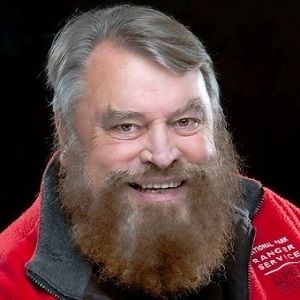 He is a married man and his wife’s name is Hildegarde Neil. The couple married in 1978. They are also blessed with a daughter, Rosalind.

Blessed was previously married to an American actress Ann Bormann. They also have a daughter named Catherine, but the couple later divorced.

Who is Brian Blessed?

Brian Blessed is a famous British actor, comedian, adventurer and author who is known for his giant build up, operatic voice and expressive shrewdness. His best performances include his roles in ‘Z-Cars’, ‘I Claudius’, ‘Flash Gordon’ and ‘Dark Ascension’. He has escaped death twice, firstly, in an avalanche on Mount Everest and secondly, in a plane crash in the jungles of Venezuela.

Brian Blessed was born on October 9, 1936, in Mexborough, Yorkshire, to William Blessed and Hilda Wall. His father was a coal miner at Hickleton Main Colliery. His father earned £14 and 10 shillings during that time. However, there is no information about his mother. Brian spent his childhood in the mining village of Goldthorpe.

Before he started his career in entertainment, he has also worked as an undertaker and bodyguard.

He went to Dearne Secondary Modern School in Bolton. While working in different blue-collar jobs, he took drama training at the Bristol Old Vic Theatre School.

When he was 15, he quit school in Goldthorpe. He had to quit his school because his father had an accident while working in the mine and Brian became the family breadwinner.

Later, he went to drama school and became an assistant stage manager.

In 1962, Brian Blessed’s acting career got the momentum from the BBC television series, ‘Z-Cars’. He played the role of PC ‘Fancy’ Smith in it. In 1966, he rejected the lead role of the doctor in BBC’s sci-fi drama, ‘Doctor Who’. In the same year, he participated in the play, ‘Incident at Vichy,’ screened at the Phoenix Theatre in London.

From 1967-1969, he played small roles in British TV series: ‘The Avengers’ and ‘Randall and Hopkirk (Deceased)’. He accepted a role in BBC’s 10-part adaptation of ‘The Three Musketeers’. He played Porthos in it. In 1974, Blessed essayed the role of William Woodcock in ‘Boy Dominic’, the Yorkshire television series.

He also acted as Caesar Augustus in BBC drama series: ‘I, Claudius’ (1976) and ‘Basileos in The Aphrodite Inheritance’ (1979). In 1978, he hosted the docudrama, ‘The Joy of Bach,’ which was based on the life of German musician Johann Sebastian Bach. He played the title role in a few scenes.

In the 1980s and 1990s, Brian Blessed showed his brilliant comedic skills. His roles, dialogues, exclamations, and voice quality were widely praised. Meanwhile, he continued doing performing on stage. In 1980, he plays the character of Prince Vultan in the movie ‘Flash Gordon,’ which is remembered for his exclamations, “DIVE!” and “Gordon’s alive!” Three years later, he presented his most cherished role of Richard IV in ‘The Black Adder’ (First Series). In 1981, he acted as both Old Deuteronomy and Bustopher Jones in Andrew Lloyd Webber’s musical production, ‘Cats’.

In 1986, his TV roles included playing Long John Silver in ‘Return to Treasure Island’ and King Yrcanos in ‘Doctor Who’. The next two years were marked by his work as Spiro in the famous BBC TV adaptation ‘My Family and Other Animals,’ and as General Yevlenko in the mini-series, ‘War and Remembrance’. In 1991, he portrayed Robin Hood’s father Lord Loxley in the Hollywood movie, ‘Robin Hood: Prince of Thieves’.

Six years later, he played the role of Squire Western in the BBC TV adaptation ‘Tom Jones’, a comic novel by Henry Fielding. From 1989 to 1996, he performed the following roles both on stage and screen: The Duke of Exeter (‘Henry V’), Antonio (‘Much Ado About Nothing’) and the Ghost of Hamlet’s Father (‘Hamlet’). Ten years after ‘Hamlet’, Blessed again portrayed Shakespearean characters, Duke Frederick and Duke Senior, in ‘As You Like It’.

Brian Blessed: Adventure and other works

Brian Blessed has tried climbing Mount Everest thrice, reaching up to 8,600m and 7,700m in 1993 and 1996 respectively. He, however, did not reach the summit. During one of his journeys, he had to abandon his expedition midway to save the life of a fellow mountaineer. He has successfully climbed Mount Kilimanjaro in Tanzania and Mount Aconcagua in Argentina, reaching their highest points.

He also has undertaken expeditions to the North Magnetic Pole and into the jungles of Venezuela. His interest in astronomy made him complete 800 hours of space training at Star City in Russia. He has swum across the Amazon with Pemon Indians and was nibbled on by piranhas.

From 2007 to 2008, Brian Blessed served as President of the Television and Radio Industries Club (TRIC). He is a patron of the Hopefield Animal Sanctuary (a non-profit organization that cares for animals) and PHASE Worldwide (an NGO that works in remote areas of Nepal to improve education, healthcare, and livelihoods). In the 2016 Birthday Honours for services to the arts and charity, he was appointed as the Officer of the Order of the British Empire (OBE).

Brian Blessed holds the world record for being the oldest man to climb a height of 28,500 feet without oxygen supplement. He received honorary degrees from the University of Bradford (2003) and Sheffield Hallam University (2004).

Brian also got Honorary Membership of the Cambridge Union. He received the Spirit of Hammer Award in 2013 at the Metal Hammer magazine’s ‘Golden Gods Awards’.

The English actor has a net worth of $500 thousand according to the sources.

When he did odd job such as an undertaker, his income was 35 shillings a week, as an assistant stage manager, he earned £4, 19 shillings and sixpence per week. In between, he would also sing in some bars and get £15 a week. When he was a bodyguard of a well of young lade, he earned £10 a week.

He has been far from these different rumors and controversies.

He stands with a height of 5 feet 9 inch. And his weight is unknown. He has a long beard and has brown colored hair and eyes.

Being an actor, he is active on the social media platform and has a huge fan following.