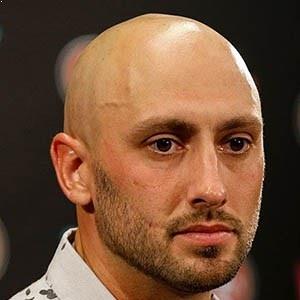 Brian Hoyer is a married man. He is married to his high school sweetheart Lauren Scriven.

The pair married on July 2, 2010. They have one son, Garrett, and one daughter, Cameron from this relationship.

The marriage is going strong and there is no news regarding any extramarital affairs.

Who is Brian Hoyer?

Brian Hoyer is an American football quarterback for the New England Patriots of the National Football League. Previously, he played college football for Michigan State.

Additionally, he has also played for the Pittsburgh Steelers, Arizona Cardinals, and San Francisco 49ersamong others.

Hoyer was born in Lakewood, Ohio on October 13, 1985, to parents Julie and Axel Hoyer. Became interested in the world of football since his childhood years. He is of American nationality. Additionally, there are no details about her ethnic background at present.

Hoyer initially played football and baseball for the Wildcats. During his college career, in 2005, he completed 15-of-23 passes (.652) for 167 yards and two touchdowns.

In 2008, he completed 180 of 353 passes for 2,404 yards including nine touchdowns and nine interceptions. Coming to his professional career, he signed with the New England Patriots in 2009.

Hoyer completed 11-of-19 passes for 112 yards in his debut game. In addition, he completed his preseason 29–44 for 354 yards, including one touchdown. He was released by the Patriots in the 2012 season. Later, he signed with the Pittsburgh Steelers on November 20, 2012.

Eventually, he was signed by the Cleveland Browns in the 2013 season. He signed a two-year, $10.5 million contract with the Houston Texans on March 11, 2015. He has also played for Chicago Bears and San Francisco 49ers. Furthermore, he signed a three-year contract to return to the Patriots on November 1, 2017.

Hoyer became part of a QB controversy for the Cleveland Browns. Furthermore, he has been part of several other controversies over the years. At present, there are no rumors concerning his life and career.

Talking about his body measurement, Hoyer has a height of 6 feet 3 inches (1.91 m). Additionally, he weighs around 215 lb (98 kg). Furthermore, he is bald and his eye color is dark brown.