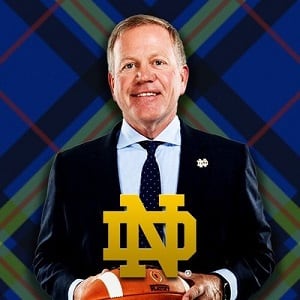 Brian Kelly is a married man. He is married to Paqui Kelly. The pair has three children together, Patrick, Grace, and Kenzel. Paqui survived breast cancer and is currently involved in Kelly Cares Foundation. Their marriage is going strong as there is no news regarding any extramarital affairs at present.

Who is Brian Kelly?

Kelly was born in Everett, Massachusetts on October 25, 1961. He was born as Brian Keith Kelly to parents Paul Kelly and Thelma Maitland. Additionally, he developed a keen interest in the world of football since an early age. He is of American nationality. Furthermore, he belongs to the Irish ethnic background.

Talking about his education, Kelly attended the St. John’s Preparatory School. Additionally, he also attended Assumption College and graduated with a bachelor’s degree in political science.

In 1987, Kelly joined the Grand Valley State University staff. He later took over as head coach in 1991. Additionally, In Kelly’s 13 years at Grand Valley State as a head coach, he won five conference titles. In addition, the team made six Division II Playoff appearances. He had a record of 118–35–2 in 13 years. After the 2003 season, he became the 24th head coach at Central Michigan University. Furthermore, he was appointed as Cincinnati’s head coach on December 3, 2006.

Kelly led Cincinnati to a competitive position in the Big East in his first full season. In the 2010 season, he beat Purdue 23–12 in his first game at Notre Dame. In the 2016 season, Notre Dame finished 4–8. More recently, in the 2018 season, Kelly opened at home against the Michigan Wolverines. They won the Game 24-17.

Kelly’s salary is $1.65 million. However, there are no details available about his estimated net worth at present.

Brian’s career at Notre Dame has been marked by multiple scandals. He became part of a controversy recently after an academic misconduct. Additionally, he was involved in another controversy after a St. Mary’s College student was allegedly sexually assaulted by Notre Dame player. However, the team stayed silent on the matter. At present, there are no rumors concerning Brian’s life and career.

Talking about his body measurement, there are no details available about Kelly’s height and weight. His hair color is grey/blonde and his eye color is green.