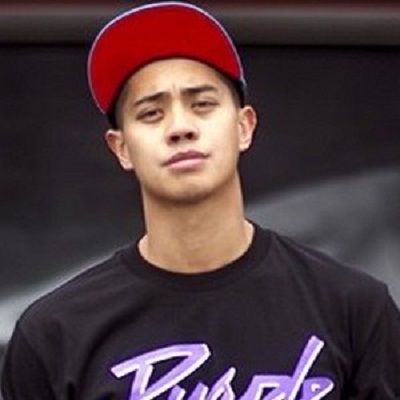 Brian Puspos is currently in a romantic relationship. He is dating his longtime girlfriend, Aja Dang who is a fashion model who has worked with various magazines such as Fox Sports, Maxime Magazine, Xbox LIVE, and so on as a model. They began dating since 2013 and they seem happy with each other.

Brian Puspos is an American choreographer and a YouTuber who rose to fame after finishing in second place on the MTV reality competition series ‘America’s Best Dance Crew’.

He was born on 2nd May 1986, in Houston, Texas, the United States of America. His horoscope is Taurus. He was into dancing and singing since his childhood. Surprisingly, his parents were ballroom dancers which is why dancing came naturally to him. He also has a  sister who is actively involved in singing.

Brian holds American citizenship but his ethnicity is unknown.

He attended Cypress Creek High School, in Harris County, Texas and completed his education from there.

After graduation, he took part in various dance shows and also played the role of a backup dancer in multiple performances. After that, he competed in talent shows and gigs around Houston and captained his high school’s all-male step team. His crew SoReal Cru, was placed second in the Season 2 of America’s Best Dance Crew (ABDC) championship in 2008.

At that time, he did his own choreographies for various popular artists and his own crew. Additionally, he performed with Most Wanted Crew in the year 2012 in season 7 of ABCD. He has conducted various workshops and performance in over 40 countries. Besides, he made his debut EP titled Slow Love and Bangin in January 2017. Recently, he featured in rapper GoldLink’s music video for Spectrum.

He started his official YouTube channel on 25th August 2009 on his own name and uploaded his first video, Brian Puspos Choreography – Always & Forever by Marques Houston. Since then he has been uploading several dance and choreography videos and his own songs.

He received the Male Choreographer of the Year title by World of Dance in 2012 and 2014.

He has an estimated net worth in between, $400k to $500k which he earned through his career as a choreographer and YouTuber. Also, he earns an estimated $1.2k – $18.9k per year calculating the daily views and growth of subscribers.

Brain received backlash about YG’s iKON use of his dance routine after a controversial tweet in the year 2014.

He has since deleted his tweet but screenshots of his tweet, as well as replies he sent regarding the issue, have continued to circulate online. As of now, Brian has maintained applaudable professionalism to avoid anything which could spark rumors and controversies.

How tall is Brian Puspos?

He has a height 5 feet 8 inches with average body weight. Also, he is very agile, fast, athletic and muscular. In addition, he has dark brown colored hair while his eyes are light brown in color. He has several tattoos on his body and each tattoo has its own meaning. He once said that his tattoo sleeve is symbols of each member of his family.