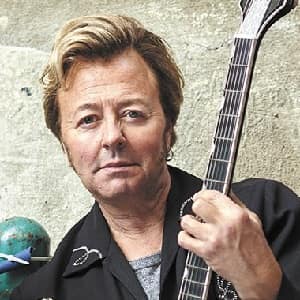 Veteran performers are dying off, and new acts simply aren't emerging on the national scene.

Rock and roll and swing never quite mixed. Rock and roll came in and just blew everything out of the water. Big bands were dead.

What is the relationship of Brian Setzer?

Brian Setzer has been married a total of three times in his career. He married DeAnna Madsen on 14 February 1984. They later separated in 1992.

They have a son Cody from this marriage. Additionally, Setzer married Christine Schmidt on 3 September 1994 and later separated in 2002. Furthermore, he has two children from this relationship.

Currently, Setzer is a married man. He is married to Julie Reiten. The pair has been together since 21 May 2005.

Who is Brian Setzer?

Brian Setzer is an American singer, songwriter, and guitarist. People mostly recognize him as a member of popular music groups like Stray Cats and the Brian Setzer Orchestra.

He has also provided soundtracks for several movies and television series.

Setzer was born as Brian Robert Setzer in Massapequa, New York on April 10, 1959. He developed a keen interest in music in his childhood years.

Talking about his education, there is no information regarding Setzer’s educational background.

Setzer initially began playing the euphonium. Additionally, he performed in several jazz bands while his time in school. Soon, he became a member of the Bloodless Pharaohs and the Tomcats.

The Tomcats later became the Stray Cats. He has since then released several solo albums.

Furthermore, he has also performed as a guest with several artists and bands including Johnny Hallyday, Twisted Sister, Jimmy Barnes, Paul Rodgers, Arlen Roth, Gary Hoey, Mike Ness, and Tomoyasu Hotei among others.

Some of Setzer’s albums include ‘The Knife Feels Like Justice’, ‘Live Nude Guitars’, ‘Rockin’ By Myself’, ‘Ignition!’, ‘Nitro Burnin’ Funny Daddy’, ‘Setzer Goes Instru-Mental!’, and ‘Rockabilly Riot! All Original’ among others.

In addition, his band Stray Cats has also released several albums to date. Some of them are ‘Gonna Ball’, ‘Built for Speed’, ‘Rant n’ Rave with the Stray Cats’, and Choo Choo Hot Fish’.

Furthermore, his other band The Brian Setzer Orchestra has released albums like ‘Guitar Slinger’, ‘Jumpin’ East of Java’, ‘Dig That Crazy Christmas’, and ‘Rockin’ Rudolph’ among others.

Setzer has not revealed his current salary. However, he has an estimated net worth of around $8 million as of 2022.

Setzer has not been part of any notable controversies in his career. Additionally, at present, there are no rumors concerning his life and career.

Talking about his body measurement, there are no details available relating to Setzer’s height and weight.

His hair color is blonde and his eye color is dark brown.