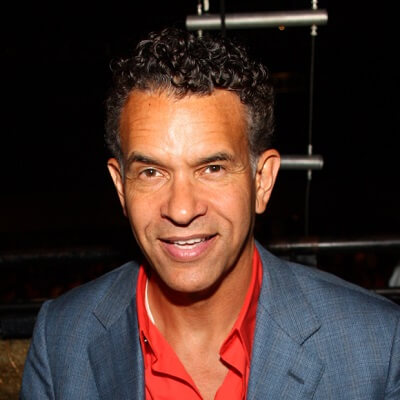 Brian Stokes Mitchell is a married man. He is married to Allyson Tucker. His wife is also a performer. She has appeared in various Off-Broadway and Broadway productions such as Chita Rivera: The Dancer’s Life, Man of La Mancha, Love Life, etc.

The couple met in 1990 when both of them were cast in the Broadway production of Oh, Kay! They dated for a few years before exchanging wedding vows on 3rd September 1994. From their marriage, the couple has a son named Ellington Stokes Mitchell who was born in 2003. Stokes took a seven-year break from Broadway after the birth of his son.

Who is Brian Stokes Mitchell?

Brian Stokes Mitchell is an American Tony Award-winning actor and singer. He is best known for his work in the musical, ‘Kiss Me, Kate’. Moreover, he is also known for ‘The Prince of Egypt’ and ‘Ghost Dad’.

Brian Stokes Mitchell was born in Seattle, Washington, USA, on October 31, 1957. As of 2020, his age is 62. He was born to parents George Mitchell(father) and Lillian Mitchell(mother).

His father was an electronics engineer for the US Navy. Because of his father’s profession, his family had to move frequently to different places. His mother used to be a school administrator. He is the youngest child of his parents’ four children.

Stokes lived in San Diego for six months, Guam for a couple of years, the Philippines for six years, and then back to San Diego. He took part in musicals even as a kid and has interested in dramas and musicals since his childhood days. He started acting professionally from his high school days.

His ethnicity is German, Scottish, African, and Native American.

The Broadway legend was diagnosed with COVID-19 on April 1, 2020. The 62-year-old revealed the worrying news through his social media accounts. He also said that his wife and son have been asymptomatic so there is no need to worry about them. With the post, he also reminded people to stay safe and stay in isolation.

He has now fought the deadly virus and recovered. He revealed the good news on his social media accounts on 11th April 2020. Two days later, he was singing from his apartment with people below his house cheering and supporting him. He said he did it for the healthcare workers and the responders as a tribute and sign of respect.

For education, he attended Patrick Henry High School. Although he did not attend college formally, he has revealed that he studied film scoring, orchestration, and conducting at the University of California, Los Angeles.

How much is Brian Stokes Mitchell worth?

Brian Stokes Mitchell has an estimated net worth of $2.5 million. His primary source of income is his career as an actor, singer, and composer. He has not revealed his salary. An average actor in Broadway earns around $61k annually. However, Stokes is expected to earn more than that.

Brian moved to L.A. in 1976 in order to pursue a career in acting. A year later, he got his first on-screen role as John Dolan in Roots: The Next Generations. The same year, he became a series regular on the spinoff of MASH, Trapper John, M.D. After appearing for seven seasons on the series, he deciding to get more focused on stage acting. In 1988, he made his Broadway debut in the musical, ‘Mail’.

In the early 90s, he portrayed the recurring character, Trevor Collins-Newsworthy on the TV show, The Fresh Prince of Bel-Air starring Will Smith. Also, in 1998, he starred as Coalhouse Walker in the Broadway musical, Ragtime for which he received a Tony Award nomination. The same year, he provided the singing voice in the animated film The Prince of Egypt for the character, Jethro. Moreover, he received lead roles in multiple Broadway musicals including Man of La Mancha and King Hedley II.

Some of his voice acting credits include The Addams Family, James Bond, Jr., and Vampirina.

In 2004, Stokes became the chairman of the board of the Actors Fund of America. Similarly, in 2016, he received Tony Award Isabelle Stevenson Award. He released his self-titled album in 2006 and six years later, released his second album, Simply Broadway in 2012.

Mitchell has not been involved in any controversies. He has been able to keep himself away from any kind of controversy and scandal. Also, he has not done anything controversial in his career so far. He has also given some outstanding performances on stage and always helps people in need. He is one of the most well-known and respected Broadway actors around. Similarly, there are no rumors of any kind about him.

Brian Stokes Mitchell stands at a height of 6 feet. He weighs around 70 kg. His hair color is black and his eyes are brown in color.

You may also like to read the Bio, Career, Net Worth, Body Measurements, Relationships, Social Media, and more about Lizze Broadway, Kellie Overbey, Nick Cordero, etc.