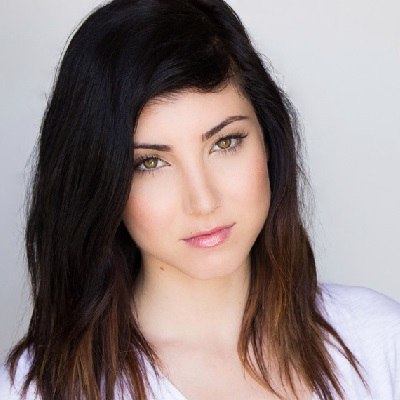 Briana Cuoco‘s current relationship status is possibly single. Till date, she has not introduced anybody as her girlfriend or lover.

As of now, she has not shared any details on her previous relationship and dating history. Probably, she is waiting for the love of her life.

Who is Briana Cuoco?

American Briana Cuoco is a multitalented actress, singer, and choreographer. He is renowned as Mary Bennet of The Lizzie Bennet Diaries and Janice Fox of Criminal Minds.

Currently, she is the voiced character; Batgirl and Goth Chick in the animated TV series, Harley Quinn.

Her upcoming TV series, The Flight Attendant is in the stage of post-production.

Briana Cuoco was born on 29th November 1988 in Ventura, California, United States. Her birth name is Briana Justine Cuoco. She is of Italian-Latin ethnicity.

Her mother, Layne Ann Cuoco is a homemaker. Whereas her father, Gary Carmine Cuoco is a real estate broker by profession. She has an elder sister, Kaley Cuoco. Kaley is an actress and producer by profession. Details on her academics are behind the curtains.

Briana Cuoco started her career as a singer with NBC’s singing show, The Voice’s 5th season. In the show, she became the top 32 contestants about 50,000 contestants. She started the show’s journey along with the judge, Christina Aguilera, and ended being part of the team, Blake Shelton.

After that, she also appeared in the various theater plays including BAZ: Star Crossed Love at The Palazzo as the lead Satine.

Moving forward, in 2012, she started her acting journey on TV with the series, The Lizzie Bennet Diaries as Mary Bennet. The year, she appeared in a series like The Lydia Bennet!! and The Newsroom. Prior to that, in 2001, she also appeared in The Nightmare Room for an episode only.

After that, she appeared in TV series like Mom, Criminal Minds, The Bold and the Beautiful, and Mom in some character roles. Lately, in 2020, she contributed her voice to the various character in the TV series, Harley Quinn.

As of now, she is busy with her upcoming TV projects.

Talking about net worth, her sister, Kaley has an estimated net worth of $100 million. Her earning per episode is in the range of $1 million.

Briana Cuoco has brown eyes with brunette hair. She stands at a height of 5 feet and 8 inches and weighs around 58 kg. Her body measurements are 32-26-32 inches.

As of now, she has not been through any sort of controversy and scandals that created headlines in the media. Besides that, she has also managed to maintain a distance from any type of rumors.

She also has a self-titled YouTube channel that she created in 2014.