Brianna Keilar is a CNN anchor Right Now who is renowned as a White House Correspondent. She is married and a mother of one kid.

Brianna Keilar is married to Fernando Lujan. His husband, Lujan is a military personality.

The wedding took place on the 30th of December 2016 in Leg Vegas while the couple was engaged in July of the year. The news of the wedding was broke by Brooke Baldwin on CNN.

Together, they are blessed with a son, Antonio. He was born on the 8th of June 2018.

Previously, she was married to Dave French on the 2nd of May 2009. Her Ex-husband, Dave French is a Film producer by profession. 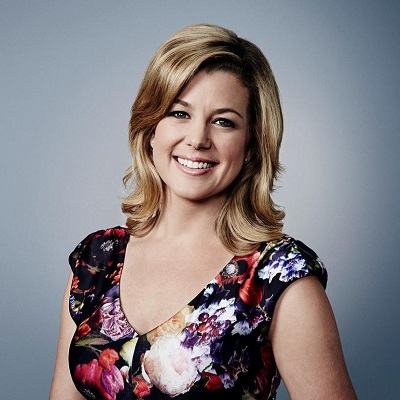 What I've tried to do is focus on either my job or being a mom, and just go really hard on that so that I can feel like I'm doing my best job at both roles.

Who is Brianna Keilar?

Brianna Keilar was born Brianna Marie Keilar on the 21st of September 1980 in Canberra, Australia.

After two years of her birth, her parents moved to Orange County, California. She is of British-Irish ancestry.

In 1998, she graduated from Mission Viejo High School. After that, she joined the University of California, Berkeley. From the university, she earned a double Bachelor’s degree with Honors in Psychology and Mass Communication.

After completing University, she started her career as an intern for KTVU-TV affiliated to CNN and FOX  in San Francisco. Completing her intern period, she joined KIMA TV station as a general assignment reporter. For the company, she covered local stories and events. At the time, she also worked for the local radio station as a newsreader.

Moving forward, she joined the CBS network as a general assignment reporter in Yakima, Wash. Later, she became an anchor of the CBS newscast.

The year 2008, became of a turning point of her career as she covered the $700 billion bank bailout.

In 2012, she became the White House correspondent covering President Obama’s campaign. Also, she was the Congressional correspondent for the network.

In 2016, the presidential campaign, she was the lead reporter covering Hillary Clinton. Apart from that, she also reported the Democratic field.

In 2019, she started writing the column, Home Front. The column represents the militaries families trying to establish a bond between civilians and militaries.

She is a blue-eyed blonde. Her height is 5 feet and 3 inches and weighs around 55 kg.