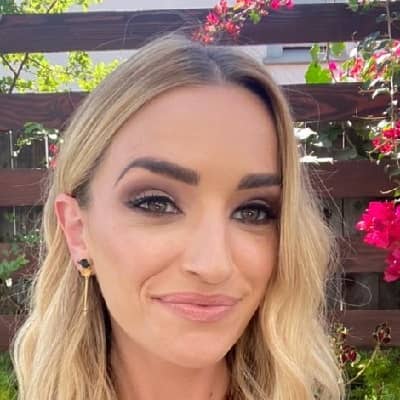 Brianne Howey is taken. She is in a committed relationship with her long-term boyfriend, Matt Ziering. Matt is a California-based Regulatory Advisor.

The couple met for the first time in 2015 at a bar through some mutual friends. After dating for over four years, the couple supposed to be married in October of 2020 but postponed their wedding because of the pandemic.

If the situations become cool down then they were hopefully get married in 2021. Furthermore, Howey often posts pictures together with her boyfriend on her Instagram handles.

Who is Brianne Howey?

Brianne Howey is an American film and television actress. She emerges the popularity after appearing on The Fox supernatural horror television series, The Exorcist (2016), and Fox thriller series, The Passage (2019).

Presently, she is starring in the lead role of Netflix’s teen series “Ginny & Georgia” as Georgia Miller.

The actress was born on the 24th of May 1989 as Brianne Nicole Howey. She hails from Los Angeles, California, USA, and grew up in La Canada Flintridge, California. Brianne holds an American nationality and belongs to the Caucasian ethnicity.

Brianne is the oldest kid of her parents among five children. One of her sister’s names is Cailan Howey besides she hasn’t disclosed her other sibling’s details in the media. Also, her parent’s identity is under the curtain at the moment.

Talking about her academics, she studied at a girl’s Catholic high school in Pasadena where she was a member of the improv team. For further study, she joined New York University Tisch School of the Arts to study theater and graduated in 2011.

Brianne stepped into an acting career in the year 2008 through the short film, Suckerpunch where she was cast in the role of Jess Ramsey. Afterward, she appeared in various short films like Appropriatr Sex (2009), Party Favors (2010), Baby Ruth (2011), Backseat Driver (2013), and more.

In the year 2010, Howey made her television debut through the episode The Bachelors of 90210 where she portrayed the role of Stacey. Similarly, she made an appearance in the 2011 police procedural television series, NCIS as a high school girl.

From 2011-2012, she portrayed the role of Emily in a sitcom, The Middle. In 2014, Howey made an appearance in a black comedy film titled Horrible Bosses 2 as Candy. Lately, she cast in the 2019 romantic comedy film, Plus One as Jess Ramsey. The film produces by Jeff Chan and Andrew Rhymer starring Maya Ersjin, Jack Quaid, Perrey Reeves, and other cast members.

Furthermore, some of her notable film and television series are enlisted below in the table,

To date, Howey has managed to maintain her clean profile in the media. She hasn’t been part of any sorts of rumors and disputes that could hamper her personal and professional life.

As per other online sources, Howey has an estimated net worth of around $800 thousand throughout her profession as an actress. However, her actual salary and yearly income are still under review.

The actress has an impressive body type with a fair complexion. She stands at the height of 5 feet 6 inches tall. Likely, her weight is around 52 kg.

She has beautiful brown pair of eyes with blonde hair color. Her waist and hip sizes are 26 and 34 inches. Further, she wears 33C bra cup sizes.