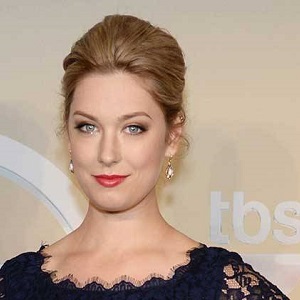 “I like to take pictures of my Starbucks cups because, while I don't think my name is that difficult, apparently it is!”

Briga Heelan has been married to her ‘Ground Floor’ co-star Rene Gube since May 8, 2015. They engaged on October 16, 2014, and married after one year. They announced on October 31, 2016, that they were expecting their first child(daughter) due in March 2017. And welcomed a daughter Bennet Alejandra Gube on March 23, 2017.

Who is Briga Heelan?

Briga Heelan is an American actress and comedian who is famous for her work on the sitcoms ‘Ground Floor’, ‘Cougar Town’, ‘Undateable’, ‘Love’ and ‘Great News’.

She was born on April 2, 1987, in Andover, Massachusetts, USA. She is currently 31 years old. Her father’s name is Kevin Heelan and her mother’s name is Kimball Heelan. Her father is a  playwright, dramatist, and faculty member at Philips Andover Academy since 1983 and her mother is an actress and Lowell Public Schools, teacher. Her parents met for the first time when Jevin was getting his Master’s degree at Smith College.

She joined Walnut Hill School for the Arts. She studied at the Cincinnati Conservatory of Music for a year. She transferred to the University of Southern California.

She became recognized after her TV role on ‘Coughar Town’. She played the recurring character on ‘Undateable’ and appears in three episodes plus the pilot.

She managed her time to shoot both Bill Lawrence-helmed ‘Ground Floor’ and ‘Undateable’ simultaneously. Her performance on ‘Ground Floor’ was reviewed positively by the TV critic Alan Sepinwall and by The Los Angeles Times.

She has not been so successful in collecting awards and nominations in her name till date.

She has an estimated salary of $1 million and her major source of income is her professional career.

There was a rumor that her husband and she were having difficulty while choosing their daughter’s name.