Brigitte Nielsen is an actress, model, presenter, and singer. She has mostly been in the limelight because of her high profile relationships and marital affair. Brigitte is married and has four children. 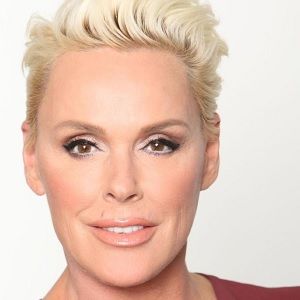 I do expose my body, but only because I think people should have something nice to look at.

I like to have men look at me from the bottom to the top.

People think I'm strong as hard as I look. But I've a very sensitive side and need to be loved by everyone.

Brigitte Nielsen is married to Mattia Dessi since July 8, 2006. Mattia is professionally a bartender and has been living happily with Brigitte in Palm Springs.

And until now, she has been involved in numerous other relationships. She was married to Kasper Winding in 1983. The couple gave birth to a son Julian Winding. And later, they separated in 1984.

In 1985, Brigitte married Sylvester Stallone. However, their marriage was not successful even with lots of popularity of the couple. And after 19 months of marriage, they divorced. This divorce was settled with $6 million.

Furthermore, she was married to Sebastian Copeland in 1990. This marriage also didn’t last too long. And after two years they decided to part their ways.

In 1993, she married Raoul Meyer. During her 12 year marriage with Raoul, she gave birth to two sons, Douglas Aaron and Raoul, Jr.

She was also engaged to Mark Gastineau. They have one child, Killian Marcus Gastineau. But they never got married.

In addition, Brigitte has had a short relationship with Tony Scott, Sean Penn, Flavor Fav, and Arnold Schwarzenegger.

And for now, she is living happily with Mattia without any rumors and affairs.

Who is Brigitte Nielsen?

Brigitte Nielsen is a Danish-Italian actress. In addition, she is also a singer, columnist, and model. She is widely famous for her role in Red Sonja, Cobra, Rocky IV, Beverly Hill Cops II, and Snowboard Academy.

Nielsen has also gained her popularity as the ex-wife of Sylvester Stallon.

Nielsen was born on July 15, 1963.  The couple Hanne Nielsen and Svend Nielsen gave birth to Brigitte in Rodovre, Copenhagen, Denmark. Her mother was a librarian and her father was an engineer.

And, she is the sister of Jan Nielsen and has Greek ethnicity.

Brigitte is a school drop-out. To continue her modeling career in Paris, she had to leave her school when she was 16 with her parents’ permission.

She is fluent in Danish, English, German, and Italian.

When she was 16 years old, Brigitte Nielsen moves to France. This was the start of her professional career as she was starting her modeling career. Being a tall woman and having great looks helped her in many ways to achieve success.

As a result, she was able to work for Marvel Comics, Greg Gorman, Giorgio Armani, and several others. In addition, she also has posed for Playboy magazine.

Her gradually increasing fame landed her in various movies. She made her debut as an actress in 1985 in the film Red Sonja. Following this, she has appeared in numerous other movies and has become famous all over the world.

Some of her outstanding performances can be seen in Rocky IV, Beverly Hills Cop II, Domino, Cobra, and Snowboard Academy.

Furthermore, she has appeared in numerous television series including, Counterstrike, Nite Tales: The Series, Raising Hopes, and SOKO 5113. Also, she is the host of the show Gitte Talks. And she is the presenter of the show Wirt Sucht Liebe.

In the meantime, she was expanding her experiences in many of her other interest such as music. In 1987, she released her first album Every Body Tells a Story.

Her song Body Next to Body has a very good review and was able to gain fame. In addition, she has numerous singles throughout her career.

She has received Razzie Award under her name in 1986. In addition, she got a nomination for Bravo Otto and Razzie Awards.

As of now, this actress’s net worth is about $400 thousand. However, we are not aware of her salary as of now.

There is a long list of rumors and controversies related to Brigitte.

Also, there was a rumor that she turned down $1 million for spending a night with an Arab prince.

And the more important of all is her alcohol problems. In the past, she was involved in numerous incidents because of being drunk. Later she even went to a rehabilitation center. And she said that she has quit smoking and drinking. However, in 2012, she was seen in the park of California with a cigarette on her hand and was said to be drunk as well.

Brigitte Nielsen has an impressive height of 6 feet 1 inch. With blonde hair, brown eyes, and a beautiful countenance she has been able to attract many followers.