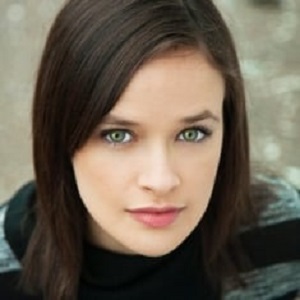 “I had a very close relationship with my grandmother. She actually helped raise me.”

The most emotionally connected I've ever been to a character is Natsuki in 'Summer Wars.'

I am so lucky to have the job that I have. I can never lose sight of the fact that people are counting on me to do my best.

What is the relationship of Brina Palencia?

Brina Palencia is a married woman. She is married to her boyfriend Paul Wing since September 19, 2009.

They are spending their quality time with each other and there is no sign of divorce between them. They have not welcomed any children to date.

Who is Brina Palencia?

Brina Palencia is a talented American actress and singer. She is popular for her voice role in several numbers of English-language dubs of Japanese anime shows.

She is well recognized as Sophia in the drama ‘Star-Crossed’ and also as Ana in an episode of ‘The Walking Dead.

Brina was born on February 13, 1984, in Oklahoma, USA. Her birth name is Brina Michelle Palencia and she is currently 38 years old. She lived in Honduras until the age of 4.

She moved back and forth between La Ceiba, Honduras, and Owasso, Oklahoma throughout her childhood. Her mother’s name is Diana(Boyd) but she has not disclosed the name of her father.

She has a brother, Gino Palencia who works at Funimation as an ADR engineer and production assistant.

Brina holds American citizenship and her ethnicity is a mix of Honduran, English, and Scottish. She can speak Spanish and English fluently.

During her time in UNT, she was influenced by the anime series ‘Dragon Ball Z’. After the completion of her graduation, she debuted her carer as a voice actress for Funimation. She also worked as a director but she stayed more focused on acting.

She has an estimated net worth of around $6 million as of 2022, and her main source of income is from her professional career.

She has maintained her celebrity status to date. So, she has not been involved in any types of scandals and rumors in her career.

She has got hazel eyes and red hair. She has a height of 5 ft. 6 inches and she weighs 53 kg. But, her body measurement is unknown.