Brit Hume is a political commentator and American television journalist.

Moreover, Hume married Kim Schiller in 1993 and both are living happily till now. 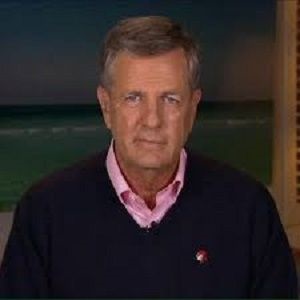 Fairness is not an attitude. It's a professional skill that must be developed and exercised

There's a certain elitism that has crept into the attitudes of some in journalism, and it played out perfectly over the issue of these little American flag lapel pins

In the end, you make your reputation and you have your success based upon credibility and being able to provide people who are really hungry for information what they want.

Who is Brit Hume?

Brit Hume is a political commentator and American television journalist. He is popular for a 23-year career with ABC News. There, he contributed to World News Tonight with Peter Jennings, Nightline, and This Week.   From 1989 to 1996, he served as ABC’s chief White House correspondent.

He was born on  June 22, 1943, as Alexander Britton Hume in Washington, District of Columbia, USA.

Hume is the son of George Graham Hume and Virginia Powell. His siblings are unknown.

From her early days, he has had some interest in commentating.

He was educated at St. Albans School in Washington, D.C.

Furthermore, in 1965, he graduated from the University of Virginia in Charlottesville, Virginia, with a Bachelor of Arts in English.

He started his career by working first for The Hartford Times newspaper company, and later for United Press International and the newspaper Baltimore Evening Sun. From 1970 to 1972, then he worked for syndicated columnist Jack Anderson. Hume became Washington editor of MORE magazine, a press criticism journal in 1973.

He began working with ABC News as a consultant in 1973, and he was offered a job as a correspondent in 1976, covering the U.S. House of Representatives and U.S. Senate for 11 years.  Hume earned television’s first Academy Award nomination for his work for ABC’s Close-Up documentary program in 1976.  He became ABC’s chief White House correspondent in 1986, covering the administrations of Presidents Bush and Bill Clinton and working closely with ABC anchors Peter Jennings and Charlie Gibson.

He left ABC in 1996, for the fledgling Fox News Network for which his wife had recently become chief of the Washington bureau. It was announced that Hume would retire as anchor of Special Report at the end of the year in July 2008, but he would remain on Fox News in a different role.

He hosted his final episode as anchor of Special Report on December 23, 2008, announcing that Bret Baier, then the chief White House correspondent for Fox News, would be his replacement. In 2016, Hume’s first show as host of on the Record drew 2.4 million viewers.

In 1991, he has received the Emmy Award for coverage of the Gulf War.

As well as, in 2003, he got Sol Taishoff Award for Excellence in Broadcast Journalism.

Hume generated some controversy on January 3, 2010, when on Fox News Sunday, he advised embattled golfer Tiger Woods to convert to Christianity to attempt to end his problems. His comments were made after the revelation of Woods’ habitual adultery and the resulting deterioration of his relationship with his family.

His estimated net worth is more than $4 Million which he earns from his profession.

He has an average body with brown hair and hazel eyes,

Moreover, he is 6 feet 4 inches tall with an unknown body mass.

Celebrities who revealed when and how they lost their virginity! What age were they?